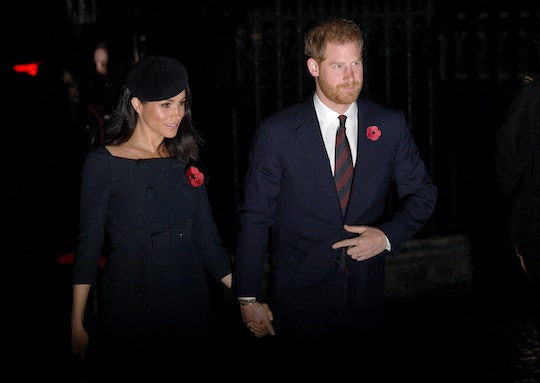 Within a matter of months, Prince Harry and Meghan Markle will get to introduce their newest addition into world. With this being the first child for both of them, this could not be any more exciting. And people all over the world are anticipating the baby's arrival this spring. This means that Markle and Prince Harry's baby could share a birthday with many members of the royal family. Let's just say, spring is a very celebratory time for the United Kingdom's royal family.

Although spring might be a few months away, it will be here before you know it. This means, within a matter of time, everyone will know everything that there is to know about the baby — their name, gender, and day of birth. But right now, there is only so little that people know about the upcoming addition to the royal family.

Earlier this month, Markle told well-wishers at a royal appearance that she doesn't know the gender of her baby, but does know that she is six months along, and due in late April, according to People — which is right in the middle of spring. The good news is, their future addition won't be alone in their birthday celebrations, because there are plenty of members of the royal family with birthdays in the spring.

The following members of the royal family all celebrate their birthdays among the spring rain showers.

The current reigning monarch of the United Kingdom was born on April 21, 1926, according to TIME, which means she turns 93 years old this year. This means that Prince Harry and Markle's newest addition could very well be born on or around the same day as the Queen, which would be incredible.

Some people might be surprised to know that the Queen actually has two birthdays, according to TIME. Although the Queen was born in the spring, she celebrates her "official birthday" in June, when the weather is much nicer, with a big parade and large celebration. Although Markle's baby will not have a parade in its honor, at least the whole royal family gets to celebrate with the Queen on her big day, right?

On May 2, 2015, Prince William and Kate Middleton welcomed their second child into the world — a daughter named Princess Charlotte, according to Forbes. In the past three years, the little girl has proven to be quite the scene stealer, according to Harper's Bazaar, choosing to take center stage at during royal appearances.

Knowing how great Princess Charlotte is at being a big sister, there is no doubt that she will make an incredible cousin to Prince Harry and Markle's kid.

Prince William and Middleton's newest addition to the family was born last year on April 23, 2018, according to The Week. In the months since then, the little boy has not made too many public appearances, but has shown himself to be quite the charmer in official royal portraits.

Not only will Markle and Prince Harry's child have a cousin who is so close in age to them, but they will also have a similar birthday, which is very nice, too.

Prince Harry and Prince William's cousin, Princess Eugenie, also celebrates her birthday in the spring. Princess Eugenie was born on March 23, 1990, according to Hello!, and is the youngest daughter of Prince Andrew and Sarah Ferguson.

Princess Anne's daughter (and Prince Harry's first cousin), Zara Tindall, was born in the later half of spring. She was born on May 15, 1981, according to Hello!, and now gets to celebrate her birthday with her two daughters every year — 4-year-old daughter Mia, and 7-month-old daughter, Lena.

The newest generation of royals love being born in the spring. Princess Anne's son (also known as Prince Harry's cousin and Zara's brother), Peter Phillips, has a daughter who was born in the springtime. Isla Phillips was born on March 29, 2012, according to Town & Country, making her one year older than cousin, Prince George.

People have seen her running around at Princess Eugenie's wedding late last fall, according to Express, and always looks like she has so much fun with her other young royal family members. Needless to say, the little girl will have so much fun with Prince Harry and Markle's newest arrival when they're just a bit older.

No matter what month of spring Prince Harry and Markle's baby is born in, they will definitely be in good company among the royal birthdays.

More Like This
Prince Harry & Meghan Markle Could Take Us Inside Their Home For A New Docuseries
Meghan & Harry Celebrated Their Anniversary As A Family Of Four For The First Time
Meghan Markle Made A Mic Drop Statement About What Working Moms Really Need
Jennifer Lawrence Just Kinda, Sorta Revealed The Sex Of Her First Baby