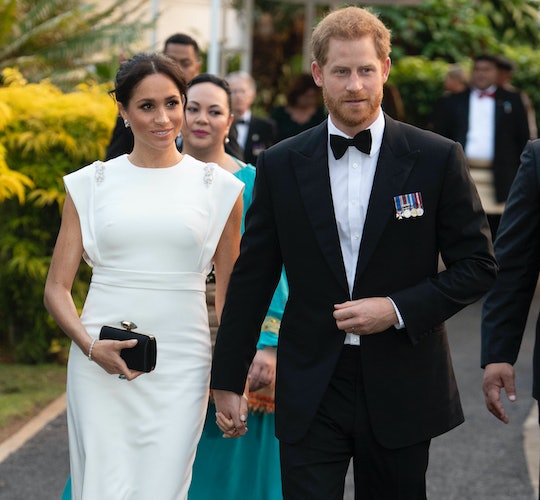 Royal names and titles can seem like something you need an advanced degree to understand. But with a new family member joining the British monarchy soon, it’s a good time to ask, what will Meghan Markle and Prince Harry’s baby’s last name be? It’s a lot more complex that it would be here in the United States, that's for sure.

The highest members of the royal family, including Prince Charles and his sons, don’t technically have to have a last name. The website for the royal family explains that before 1917, members of the family carried no last name, but that’s the year that George V chose the name of Windsor, adopted from the castle, as his family’s surname. “All descendent in the male line of Queen Victoria, who are subjects of these realms, other than female descendants who marry or who have married, shall bear the name of Windsor,” his decree read.

Queen Elizabeth kept the tradition when she took the throne in 1952, according to the royal family's website, but changed things a little in 1960 to reflect her marriage to Prince Philip. She decreed that the name would be Mountbatten-Windsor for all her children, combining her name with Philip’s. But again, it’s also perfectly fine for anyone eligible for the term His/Her Royal Highness to go without a last name at all.

As for the coming baby’s first name, that’s been the subject of a lot of debate and wagering across the pond. The Daily Express reported that Victoria is the 8/1 favorite for a girl, and Albert for a boy, with 10/1 odds. And People reported that Elizabeth has made a recent surge in the betting and now has 6/1 odds. Diana is also in the top three possibilities but could get passed by since Princess Charlotte has it as one of her middle names, as Cosmopolitan reported. Arthur and Philip are also in the top three choices, according to the outlet.

Where the baby will be born has also been the subject of much speculation and The Sun has reported that Prince Harry and Markle will skip the Lindo Wing, where Kate Middleton and Princess Diana gave birth, and opt for somewhere more private.

All of this, of course, is just speculation for the moment though. Royal fans will find out all the answers they've been itching fo soon enough, as the birth is expected in late April or early May. Look for Baby Sussex to make their grand entrance sometime around then.