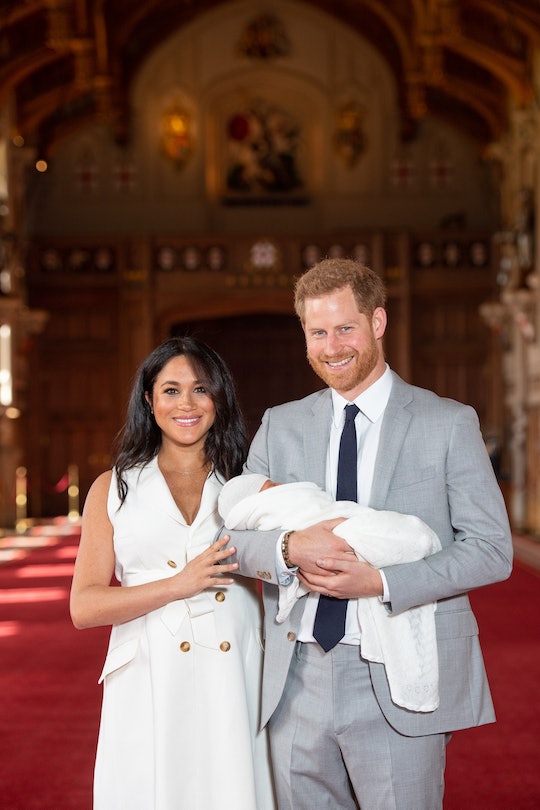 It seems like the whole world has been waiting an eternity for this brand-new royal baby, doesn't it? But the time has finally arrived. Meghan Markle and Prince Harry have announced the birth of their son, born Monday, May 6, 2019. Ever since the newest Sussex's arrival, royal watchers and fans around the world have been patiently (or, really, impatiently) waiting to catch a glimpse of the sweet baby. And Meghan Markle and Prince Harry's first baby photo is finally here for the world to see.

On Wednesday, May 8, Prince Harry and Markle posed with their new baby boy outside their home in Windsor at Frogmore Cottage. In the mini photo shoot with the new family, Markle looks stunning and glowing in a white collared dress as Prince Harry holds their newborn son in his arms.

The new parents haven't revealed their son's name just yet, as WYKT reported, but it's likely that information will come soon as well. In the meantime though, just look at that cutie! His little nose!

They look so happy!

It was sort of unclear whether or not the public would get to see a photo of the royal baby when they heard the news that Markle had given birth. After all, the Duke and Duchess of Sussex have chosen to do a number of things differently than the Duke and Duchess of Cambridge. Take, for instance, that after-birth photo call. Within a matter of hours after giving birth to each of her three children, Prince George, 5; Princess Charlotte, 3; and Prince Louis, 11 months, Kate Middleton appeared on the steps outside of the Lindo Wing at St. Mary's Hospital in London holding her newest bundle of joy (with Prince William at her side, of course). A few weeks before Markle gave birth, however, reports seemingly confirmed speculation that Markle would skip the photos after giving birth because it made her "uncomfortable."

Instead, the Duke and Duchess released a formal birth announcement on their Instagram account. Though the details were slim, the announcement shared that Markle had given birth in the "early morning" of May 6, and that the healthy baby boy arrived at "7lbs 3oz."

Given the fact that this isn't a sort of faraway shot of the new family on the steps outside of the Lindo Wing, this royal baby's first photo is quite different than those of his cousins.

Prince George, the future king, made his first public appearance while leaving the hospital with his mom and dad, both of whom looked over-the-moon in love with their new little guy. But, as the BBC reported, Kensington Palace released official photos of the baby prince taken by his grandfather, Michael Middleton, about a month after he was born.

The newest royal baby came into the world a bit differently than his royal cousins, but that's a wonderful thing — each royal mom was able to have the birth plan that she wanted, without undue influence from people, you know, not actually going through the birth themselves.