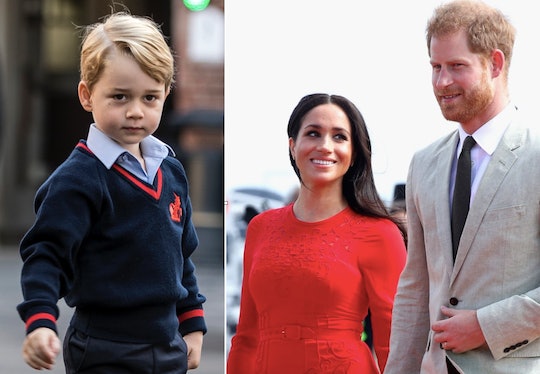 Prince George is another year older, and frankly more adorable than ever. The young royal is celebrating his 6th birthday today, July 22, and he's being showered with love from royal fans across the globe and his family, of course. On Sunday, Kensington Palace shared sweet photos of the prince on Instagram, showing off his toothless grin for all to enjoy. And in addition to the birthday wishes from his parents and the palace, Prince George got some shout-outs and nice messages from other members of the royal family, including Meghan Markle and Prince Harry, whose birthday note to their nephew on his special day was just so sweet.

Ahead of his birthday, Kensington Palace shared three photos of Prince George on Instagram, each of which drew literally thousands of comments from fans and followers. Each of the photos — snapped by mom Kate Middleton during vacation in Mustique, according to The Sun — is slightly different. One showcases his sweet smile in a soccer jersey, another captures him mid-laugh, while the third appears to be slightly more posed and features the little prince wearing a green polo.

Each of the royal portraits is adorable in its own right, but it seems that one caught Markle and Prince Harry's eye. The couple commented on the posed portrait, wishing their nephew a very happy birthday in the nicest way.

"Happy Birthday," the couple commented from their personal Instagram, adding a birthday cake and balloon emoji. "Wishing you a very special day and lots of love!"

Prince George is undoubtedly having a special birthday. After all, how many 6-year-olds get to ring in a new year of life on a beautiful island with their family? According to The Sun, Middleton, Prince William, Prince George, and the rest of the Cambridge family make a trip around this time every year. In fact, according to Harper's Bazaar, they previously jetted off to Mustique and celebrated Prince George's 5th birthday on the island, so he and his parents must be pretty fond of the place.

What's not to like. The island's website teases its safety and security, noting that all who visit are "registered with our security team before arriving on island by land, air or sea." That's no joke. Additionally, as Hello! Magazine reported, Prince George's family doesn't seek out royal treatment while in Mustique. Instead, according to Hello! Magazine, they participate in whatever the island has to offer — like scuba diving. How do I get in on the next royal family vacation?

It doesn't appear that Markle and Prince Harry were physically with Prince George for his birthday getaway, but they're known for sending royal kids love on Instagram on their special days. For Princess Charlotte, they sent a similar — albeit slightly more casual — message to their niece on her birthday in May, according to ELLE.

"Happy Birthday, Charlotte!" the couple wrote at the time. "Lots of love, H and M xo."

And in April, just before welcoming their own child, the Duke and Duchess of Sussex wished Prince Louis a happy birthday, too, according to TODAY. "Happy Birthday Louis! Sending lots of love from both of us," the couple wrote on the Instagram post celebrating the 1-year-old at the time.

Markle and Prince Harry's birthday wishes may seem a bit simple, especially considering they're for kids, but it's the royal family way. According to Reader's Digest, the family keeps birthday celebrations modest and low-key, rather than putting together over-the-top, lavish parties. Some birthdays are marked with a gun salute, but for the most part, the royals keep their celebrations private, Reader's Digest explained.

Hopefully Prince George is having an absolute blast celebrating his birthday with his family and feels the love the rest of the royal crew, as well as his adoring fans, have sent his way.