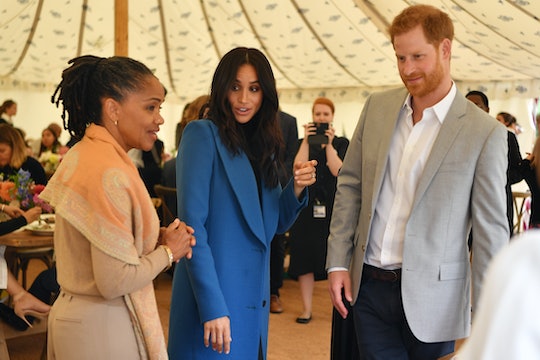 Baby Sussex is preparing to make his or her grand entrance into the world any day now. And while you might be waiting on pins and needles, it feels safe to say that Meghan Markle and Prince Harry's royal baby countdown has officially started. That's because Doria Ragland, Markle's mother — aka, Baby Sussex's grandma — has arrived in London, according to a report from Entertainment Tonight, and insiders are suggesting that the couple's first child will be here "any day."

Ragland's presence in the United Kingdom suggests that Markle and Prince Harry's baby will be here sooner rather than later. Entertainment Tonight previously reported that Markle is "enjoying her pregnancy and anticipating the days ahead." The Duchess of Sussex is said to be basking in this "happy and exciting time," as a source reportedly told Entertainment Tonight, adding that she can't wait to step into her role as a mom.

Of course, Ragland is looking forward to the baby's arrival, too. According to People, she previously said in a statement released by Kensington Palace that she was "very happy" to learn that Markle was expecting. "Ms. Ragland is very happy about this lovely news and she looks forward to welcoming her first grandchild," the statement said, according to The Sun.

Ragland's reported arrival in London comes amid rumors Markle had maybe already given birth to the royal baby. On April 15, however, those rumors were dispelled by Queen Elizabeth II's former press secretary Dickie Arbiter, who told Today Extra the public are gullible if they believe the royal baby arrived without a peep from the family.

"If you believe that [she had her baby], you'd believe anything," Arbiter said during the interview, as the Daily Mail reported. "It's really a case of keeping the royal rumor mill going — a good story sells a newspaper but, quite frankly, there isn't a substance to it."

The rumors started swirling after Buckingham Palace released a statement saying the former Suits star and Prince Harry had made "a personal decision" to keep the birth of the royal baby private, according to The New York Times. The statement read:

The public will be notified when Markle goes into labor and when the child has arrived safely, as Access reported, but there will be no photo of Markle, Prince Harry, and the baby immediately after his or her arrival, and no details about the child's name will be made public until the couple feel comfortable and, of course, has had time to "celebrate privately as a new family."

Much of Markle's pregnancy has been kept under wraps. As is the case with many royal babies, the child's exact due date hasn't been revealed. When Markle announced that she was expecting in October, she revealed only that she was due in spring, as noted by The Daily Express, which reported that the royal baby is due sometime in late April, meaning the royal baby really could come any day now.

Hopefully the final days of Markle's pregnancy go smoothly, and the royal baby makes their transition into the world with no problems. Fans of the monarchy are undoubtedly looking forward to the baby's arrival, as well as seeing the first photo. It could be a while before that happens, though.