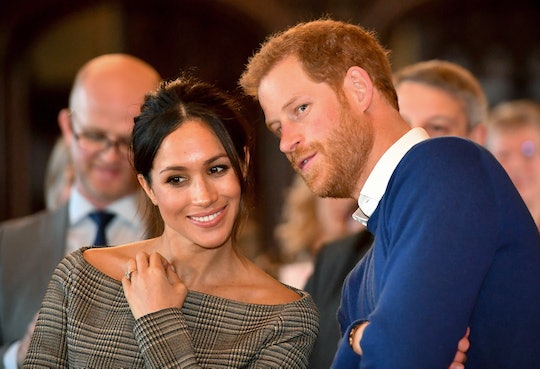 The royal wedding is still a few months away, so let's take a stroll through Prince Harry and Meghan Markle's sweetest moments as a couple while waiting. Most recently, the two of them headed off to Cardiff, Wales, for their second public engagement of the 2018 calendar year (and just their third overall as an engaged couple, according to Marie Claire) — so fans got a lot of adorable photos out of that trip. But there are a ton of other moments to remember since they first met on a blind date in early July 2016, according to Town & Country. And there are a ton of other photos to commemorate those moments, too.

Prince Harry and Markle made their trip to Cardiff on Thursday, Jan. 18, where they were "showcasing some of the rich culture and heritage of Wales at @cardiff_castle," according to a tweet by the Kensington Palace. They were also there to see an example of how organizations are working in communities across the country with Street Games, a national sports charity helping young people in the U.K.'s most disadvantaged areas. The palace shared a slew of photos from the couple's trip on its Twitter feed, thanking those who made it special, and the two of them looked as happy as can be.

During their other public engagements in the 2018 calendar year, they went to a youth radio station, Reprezent, in Brixton, south London, according to Mashable. Reprezent is the only national radio station in the U.K. that's presented by young people, Mashable reported, so their visit shows the couple's commitment to engaging with youth.

But Prince Harry was probably especially excited to introduce his bride-to-be to his hometown, "a community that has become very special to him," according to a tweet from Kensington Palace. And Markle looked super confident in their very first public engagement photos, walking through the crowds with all smiles and even accepting some flowers from fans.

Princ Harry first proposed at Nottingham Cottage at Kensington Palace in London, and the announcement of their engagement came following a statement from Queen Elizabeth and Prince Philip who said they were "delighted for the couple and wish them every happiness," according to People. According to The Sun, the wedding will take place in May 2018 at St. George’s Chapel, which is located in the grounds of the Windsor Castle where the Queen and Prince Philip live for most of the year. It's also reportedly the same church where Harry was Christened in 1984, and it's just a short walk from where he went to school at Eton College.

The couple looked in love as they posed for the first photos after their announcement at an open-air photocall at the palace’s Sunken Garden, which serves as a memorial to Harry’s late mother, Princess Diana, according to The Telegraph.

They also had an official photo op at the Sunken Garden after announcing their engagement in November 2017, according to Teen Vogue.

But Prince Harry and Markle aren't just wearing smiles when they're walking through crowds during their public appearances or taking photos for their engagement. There have been tons of more personal moments captured since the prince and the actress first made each other's acquaintance back in 2016 — and especially since they made things official. Like the time Markle joined the royal family for Queen Elizabeth II’s annual Christmas lunch at Buckingham Palace...

Or the time they enjoyed a stroll at Frogmore House during their engagement session...

Or the time they watched a wheelchair tennis match at the Invictus Games in Toronto, Canada...

I mean, Prince Harry and Meghan Markle make the whole being a highly public couple with a lot of pressure thing look easy.