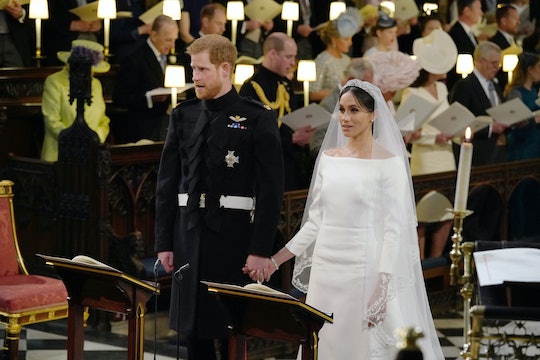 Meghan Markle Says She'll Be At Wedding Whenever She Gets There, OK?

It is a truth universally acknowledged that just because the day of a bride's wedding is "her day," she will often wind up doing all kinds of things to please everyone else. There are always plenty of people to appease, and timelines to be followed, and it can get out of hand pretty quickly. But on the day of the royal wedding, the bride-to-be Meghan Markle, future Duchess of Sussex, wasn't letting that stop her. Yeah, Meghan Markle reportedly pushed the wedding back 15 minutes and Twitter loved it.

Of course, the stakes are a bit higher for a royal wedding, so it was understandable that Markle would be hesitant to push things back, but it's completely OK that she did. It's also unexpected. "Meghan's pushed things back by 15 minutes," ABC News' David Muir told viewers Saturday morning, as the crowds began to arrive at St. George's Chapel. Originally, the services were scheduled to begin at 7 a.m. EST, with guests having arrived as early as 4 a.m. EST, as The Today Show reported. In the end, Markle was just a few behind.

For most brides, pushing your wedding back 15 minutes isn't that big of a deal, but when the whole world is watching, it would be pretty nerve-wracking. But Markle had no issue letting it be known that this is her day, and that she wouldn't back down.

And Twitter users definitely took notice of the fact that Markle was already settling into the royal family just fine, as she isn't going to let a mere 15 minutes stop her from making her fabulous grand entrance.

Now, weddings are big deals, and so Markle's need to do things on her own schedule makes total sense (although... don't keep the Queen waiting too too long). In fact, there are plenty of mistakes that can happen the morning of a wedding, something the queen herself knows to be true. According to royal jewelry designers, House of Garrard, Queen Elizabeth II actually had quite a bit of drama on her big day, as well. Per Marie Claire, House of Garrard revealed:

The Fringe Tiara was given to Queen Elizabeth on her wedding day, and the hairdresser broke it.

Yes, you read that correctly. When the longest-reigning monarch was married, her tiara wasn't exactly picture-perfect. But, not to fret. Being the queen-to-be, she was prepared. The royal jewelers continued,

On that day, they had it police escorted to the House of Garrard workshops. We fixed the tiara that morning, had it sent back to Queen Elizabeth, and then she got married in it. You don't expect the royals to have those sorts of mix-ups, but they do!

So, whatever the reason for Markle's time adjustment, it doesn't really matter. Perhaps her dress got a little wrinkled, as Princess Diana's gown did at her wedding back in 1981, as Harper's Bazaar reported. Maybe she couldn't find her shoe, or maybe she needed a couple extra minutes to practice her vows.

Really, the reason doesn't matter. All that matters is that Markle got to enjoy her wedding day, and that people all across the internet appreciated her even more for it.

Now, having the wedding start 15 minutes later than planned isn't exactly all that dramatic, but viewers certainly appreciated Markle's clear determination to do things her way. And that wouldn't be the only time she did such a thing during the ceremony. Markle also made history for walking herself down the aisle during the royal wedding, something no other royal bride has done before.

Clearly, Markle will be the kind of royal family member who isn't afraid to stand up for herself, truly becoming the kind of feminist role model the world deserves.