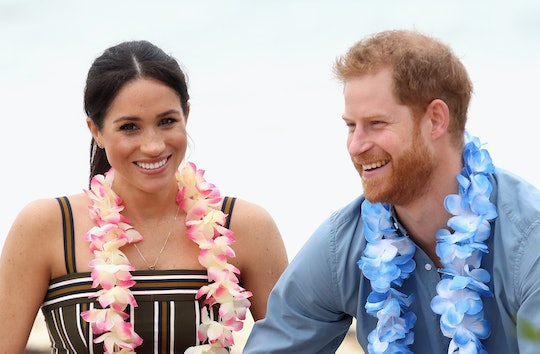 Meghan, the Duchess of Sussex is reportedly four months pregnant with her first child, and from the sounds of it, she has been lucky enough to make it through her first trimester without a ton of grueling morning sickness, or overwhelming early-pregnancy exhaustion. But that doesn't mean being pregnant has been all smooth sailing for the royal: in an appearance in Bondi Beach on Thursday, Meghan Markle revealed she's already experiencing this common pregnancy symptom, although given the hectic schedule of her overseas tour, it's also not entirely surprising.

Meghan and her husband, Prince Harry, are currently in Australia for the first leg of their 16-day tour, and though they recently announced they are parents-to-be, they haven't actually scaled back any of their previously-planned commitments. In fact, by the time the couple heads back to the United Kingdom following the trip, they'll have visited four countries, and completed 76 engagements — which, let's be honest, is already pretty ambitious even when you aren't expecting.

That probably means that Meghan should be trying to get as much sleep as she possibly can each night, but unfortunately, that doesn't really seem to be working out for her. While chatting with a pregnant fan at a walkabout held at the famous Sydney beach, Meghan said she's actually been having trouble sleeping now that she's pregnant, according to Marie Claire, and that she ended up practicing yoga in her room at 4:30 a.m. that morning, after waking up and not being able to get back to sleep.

Of course, even if the duchess weren't also pregnant, she could still be contending with undesired early mornings, thanks to the inevitable jet lagged involved in traveling such a far distance. But as any pregnant woman will likely confirm, there's nothing quite like gestating a human to completely throw your sleep schedule out of whack. Even in the early months, there is still the issue of middle-of-the-night bathroom trips (which only gets worse as the baby grows and places more pressure on your pregnant-mom bladder), and the further along you get, the more difficult it becomes to get comfortable in bed and stay asleep.

According to pregnancy site, What To Expect, insomnia can occur at any point during pregnancy, though for most women, it's likely to begin in either the second or third trimester. And if you made it to your due date without any issues, you can consider yourself lucky: more than 75 percent of expectant moms are estimated to experience pregnancy-related insomnia in the final three months.

While Meghan is still early on in her pregnancy — meaning, there's unfortunately still plenty of time for her sleep issues to intensify — for now, it seems that early-morning yoga might just be her primary pregnancy coping strategy. The duchess' love for yoga is well-documented: long before she was ever linked to Prince Harry, the former Suits actress was regularly photographed headed to her local yoga studio in Toronto, and her mother, Doria Ragland, is actually a certified yoga instructor, according to Heavy. She also shared her love for the practice on her now-defunct lifestyle blog, The Tig, as People reported.

From the sounds of it though, yoga will likely be a big part of her pregnancy: Australian mom Charlotte Connell, who is pregnant with her second child, had the chance to chat to the duchess during her trip to Bondi Beach, and said, "Meghan told me that pregnancy was like having jet lag," according to the Daily Mail, but that "physical activity like yoga and surfing is so good for healing your mind." Bondi resident Jessina Oakes also spoke to the duchess about yoga, according to the Daily Mail, and said, "She said it helps ground her and she tries to find the time to make it part of her daily routine."

Hopefully a little extra yoga will help Meghan overcome at least some of her sleep difficulties soon, since her schedule is certainly not settling down. While in Australia, she and Prince Harry will be helping to kick off the 2018 Invictus Games in Sydney, according to The Express, and will also be visiting an indigenous community in Fraser Island. Then, they'll be flying off to Fiji and Tonga, before returning back to Sydney, and then wrapping up the remainder of their tour in New Zealand.

If not though, then perhaps she'll at least figure out a way to hang in there until the end of her trip, when she can presumably return to England and spend some time catching up on her rest while her baby grows. And until then, well, let's just hope her royal aides are at least scheduling in the much-needed pregnant-lady staple, the afternoon nap.

More Like This
Meghan Markle Wore A Treasured Pair Of Earrings To Honor The Queen At Her Funeral
Kate Middleton Shares Her Kids' Sweet, Yet Honest Reaction To Seeing Old Photos Of Her
Post Malone Shared A Bunch Of Sweet & Candid Details About Life With His 4-Month-Old Daughter
Lindsay Lohan Channels Meredith Blake In Her New Christmas Rom-Com