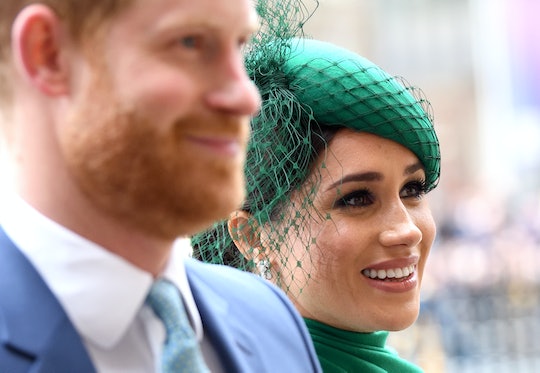 Meghan Markle Says Being 'The Most Trolled Person' Was 'Almost Unsurvivable'

If anyone knows how viscous and hurtful the internet can be, it's the Duchess of Sussex. While she's faced a near constant tide of online abuse and criticism since her relationship with Prince Harry went public in 2016, the vitriol against her intensified after the announcement of her pregnancy in October 2018. In fact, Meghan Markle says she was the most trolled person in the entire world in 2019.

Markle spoke candidly about how the abuse she faced online following her marriage to Prince Harry impacted her mental health in a recent interview on the Teenage Therapy podcast for World Mental Health Day, People reported. She noted that, despite being out of the public eye for a large chunk of the year, she was still targeted online in a way that was "almost unsurvivable."

"Yes [social media] is a great way to connect, but it also ends up being a place where there's a lot of disconnection," Markle said. "I can speak personally too, I'm told that in 2019 I was the most trolled person in the entire world, male or female."

"Now, eight months of that I wasn't even visible," Markle said. "I was on maternity leave or with a baby. But what was able to be manufactured and churned out, it's almost unsurvivable."

The Duchess of Sussex went on to say that she was trolled to such a large extent in 2019 that most people wouldn't be able to imagine what it felt like. "I don't care if you're 15 or you're 25, if people are saying things about you that aren't true, what that does to your mental and emotional health is so damaging," Markle said.

During her interview with Teenage Therapy, Markle also opened up a bit about what was happening when she went viral for telling a British journalist she was "not okay" shortly after giving birth. In October 2019, roughly five months after she'd given birth, Markle made headlines for speaking candidly about her mental and emotional state with ITV reporter Tom Bradby during a royal tour of southern Africa.

"Any woman, especially when they're pregnant, you're really vulnerable, and so that was made really challenging," ITV News reported Markle told Bradby when asked is she was okay. "And then when you have a newborn, you know... And especially as a woman, it's a lot. So you add this on top of just trying to be a new mom or trying to be a newlywed." Markle then thanked Bradby for asking, noting that "not many people have asked if I'm okay."

"It's a very real thing to be going through behind the scenes," she admitted.

When pressed if it "would be fair" to describe her as "not really okay, as in it's really been a struggle," Markle responded with "yes."

The Duchess of Sussex told Teenage Therapy she was a "tired" when giving the interview due to having to juggle her duties as a mom with her duties as a royal on tour. "I was just about to give Archie a bath. I was exhausted," she said.

"She was still breastfeeding at the time," Harry noted, further explaining the additional workload Markle was carrying at the time.

"Between every official engagement I was running back to make sure our son was fed," Markle elaborated.

The royal couple stressed to the high-school seniors who host Teenage Therapy that being vulnerable doesn't mean being weak and that talking about mental health not only helps with healing, but with removing the stigma around the topic. "Vulnerability is not a weakness, showing vulnerability in today's world especially is a strength," Harry said. "The more we talk about it the more it becomes normal, and it is normal."

In that regard, it seems the couple is living by example.