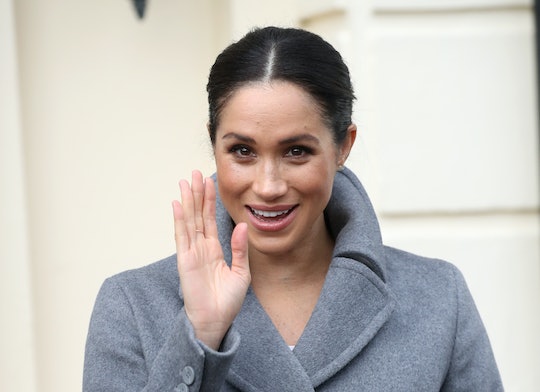 As we all know, Meghan Markle and Prince Harry are expecting the newest royal baby to join Prince William and Kate Middleton's small fleet of princes and princesses, and, much like their brother and sister-in-law, the couple will likely be doing royal appearances all the way up until the little one is due. Recently, Markle shared a pregnancy update that will totally resonate with all working moms.

While visiting Brinsworth House, a nursing facility, Markle got into a conversation with one of the residents about how she was doing with her pregnancy, as People reported. Markle said she was feeling "very good," and that on that day in particular she was "feeling very pregnant," which, TBH, is definitely a feeling anyone who has had a kid can relate to.

The conversation was held with Josephine Gordon, a former West End actress who is now 87. According to People, Markle asked Gordon whether or not she had kids of her own, to which she said: "No, I had a career." Markle replied: "Yes, that I understand." Markle spent the rest of the day greeting residents and making the rounds, all while lovingly cradling her stomach, which was dressed with a perfect maternity dress.

The world first found out about Markle's pregnancy just a few months ago, after a number of weeks of speculation that she was indeed expecting.

"Their Royal Highnesses have appreciated all of the support they have received from people around the world since their wedding in May and are delighted to be able to share this happy news with the public," Kensington Palace confirmed on Twitter.

However, E! News also reported that members of the royal family only found out about Markle's pregnancy just days — if not hours — before it was confirmed to the world, as the couple reportedly shared the happy news at Princess Eugenie's wedding. (A wedding does seem like a odd time to share such important news, given that it would possibly eclipse the excitement of the day itself, so that's up for speculation, but it is likely that it was kept a secret until the very last moment.)

Kensington Palace also told E! News that, in terms of Markle's family, her mother Doria Ragland is "very happy about this lovely news" and she "looks forward to welcoming her first grandchild."

Of course, since learning the happy news people have pretty much been obsessed with Markle's pregnancy journey, as Cosmopolitan has reported people have been speculating on everything from the baby's name (Alice, Arthur, Philip, Victoria and Diana are top contenders if it's a girl, for example) and how the couple will raise their baby.

In fact, the pregnancy could be the reason behind Harry and Meghan's recent move. Us Weekly reported the couple is relocating to a home in a more rural area, where they can raise their child with a bit more privacy than in London. “No one bothers them there,” a palace source told the magazine about the reason why they're moving. “They’re excited to raise children in the country.”

Overall, as Prince Harry and Duchess Meghan prepare for this next important chapter in their lives, the world waits anxiously in anticipation of the newest tiny royal. Until then, we'll have to get by with endearing pregnancy updates, and of course, the aspirational style Markle is always rocking — bump or not.