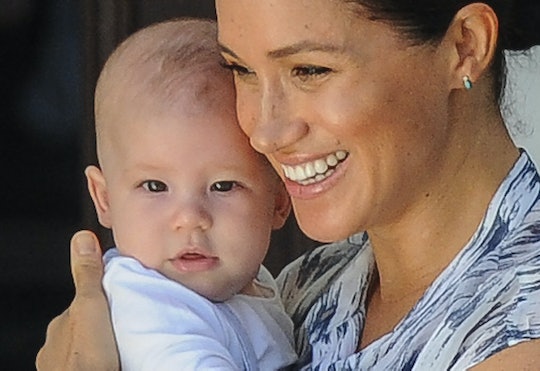 While those of us on this side of the pond were anxiously awaiting baby Archie's first trip stateside, it seems it may have already happened. In fact, according to Serena Williams, Meghan Markle apparently took Archie to the United States months ago — without any of us knowing it.

The tennis champ dropped the news while discussing what a supportive friend Markle is during a recent interview with Access Hollywood. "I really think she's, literally, the strongest person I know and the nicest, sweetest," Williams recently told Access Hollywood of Markle. "She flew all the way with a newborn to see me play in New York and flew all the way back that night, and I probably couldn't have done that."

You may remember that Markle was spotted — sans Archie — cheering Williams on as she competed against Bianca Andreescu in the U.S. Open women's singles final at Arthur Ashe Stadium in New York City on Sep. 7. At the time, Markle's trip was reported by a number of media outlets to have been a whirlwind one or two day solo visit planned at the last minute. She was also heavily criticized for reportedly leaving then-4-month-old son at home with Prince Harry.

"My children would be the first to tell you that I am not the most sentimental of mothers," the Daily Mail's Sarah Vine wrote in a September op-ed about Markle. "But even I would have thought twice about leaving my firstborn at home at the tender age of just four months in order to fly 3,500 miles to watch Serena Williams play in the U.S. Open final." Vine went on to label Markle's trip "trivial" and seemed to suggest the Duchess of Sussex didn't have the same emotional attachment to Archie that she'd had to her own children. "It would have been a huge emotional wrench," Vine wrote of leaving her own firstborn child. "Like many new mothers, I was completely obsessed with my baby."

Like any good friend would, Williams casually used her interview with Access Hollywood to put those who had mom-shamed Markle for leaving Archie in their place. In fact, while some critics deemed Markle's trip to the U.S. Open to be "trivial," Williams claimed it was proof of "what an amazing person [Markle] is."

"And that's just one of the many things that she does for me," Williams told Access Hollywood of her friendship with the Duchess of Sussex. "I call her, text her anytime crying upset, she's always there. It doesn't matter what she's going through, she sets time away [for me] and she's just so amazing."

Markle and Williams quickly became close friends after first meeting at a charity football game in 2014, According to Hello! Magazine. "We hit it off immediately," Markle wrote of meeting Williams in her now defunct blog, The Tig, the tabloid reported. "She quickly became a confidante."

Baby Archie is expected to return to the United States this Thanksgiving for what will apparently be his second visit stateside. Prince Harry and Markle will take a six-week break from royal duties beginning in November with plans to spend their first Thanksgiving as a family of three with Markle's mother in Los Angeles, California, according to The Sunday Times. If the Sussex crew does indeed spend Thanksgiving in America, baby Archie, now 6 months old, will have already seen both the East Coast and the West Coast before his first birthday. Not too shabby...