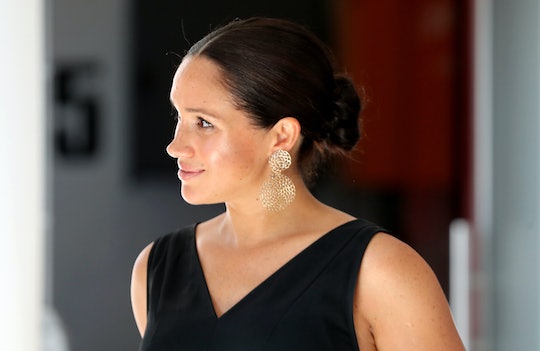 Meghan Markle is many things: A former actor, royal, wife, mother, and, most recently, the host of a meeting that convened powerful and legendary feminist women around a dining table. And on the Duke and Duchess of Sussex's official Instagram account, Meghan Markle urged women to take a stand against gender inequality and shared the "meeting of minds" that inspired her call to action.

The private meeting, which Markle says was held last Thursday during a royal tour of South Africa, brought together a handful of anti-apartheid activists, female parliamentarians, professors, educators, and policy makers. Included in the attendees was Sophia Williams-De Bruyn, who is known as one of the founding members of the anti-apartheid movement. Williams-DeBruyn, now 81, led a 1956 march of 20,000 women to the Union Buildings in Pretoria, one of the three capital's of South Africa, to protest segregation when she was just 18 years old, according to Harper's Bazaar.

Others in attendance included politician Lindiwe Mazibuko, the first non-white leader of the Democratic Alliance party, and Nompendulo Mkhatshwa of the African National Congress, who is also one of the youngest women ever to serve in Parliament, according to the Daily Mail.

"In the lead up to this tour it weighed heavily on my heart to see the countless violations against women, and I wanted to spend my time on the ground learning about the situation at hand," Markle noted in her Instagram post about the meeting. "Issues of gender inequality affect women throughout the world, independent of race, color, creed, or socioeconomic background."

Markle said that in sitting down with the legendary feminist leaders, it was "abundantly clear" that "it is not enough to simply hope for a better future." "The only way forward is 'hope in action'," Markle urged her followers, saying she was "eager" to "learn, listen and absorb the resilience and optimism" that she has experienced in South Africa.

Recently on her tour, Markle also paid her respects to former student Uyinene Mrwetyana, who, at just 19, was raped and murdered in August when picking up mail at a local post office, according to E! News. Mrwetyana's death has sparked protests and the launch of the social media campaign, #AmINext, to address gender-based violence (GBV) and femicide, according to TIME.

According to the royal couple's Instagram, Markle tied a ribbon at Mrwetyana's memorial site to "show solidarity" and also spoke to the late student's mother to relay her condolences.

"Visiting the site of this tragic death and being able to recognize Uyinene, and all women and girls effected by GBV (specifically in South Africa, but also throughout the world) was personally important to The Duchess," the Instagram post noted about Markle, who has reportedly also made private visits and meetings to understand and address gender disparities in the region. And this is an important cause because most disturbingly, 39,633 rapes and 6,253 sexual assaults were reported in the country in 2017, in what the executive director of the organization's South Africa branch Shenilla Mohamed has called a "national emergency," according to Amnesty International.

Continuing her work on gender-based issues in South Africa, Markle also recently met with women from mothers2mothers, an organization that trains and employs women living with HIV as frontline health workers in their communities, and donated two bags of outgrown clothing that belonged to Archie and her friends' children, according to TODAY.

"It’s so important we’re able to share what’s worked for our family and know that we’re all in this together with each other," Markle said. "So we wanted to share something from our home to each of yours."

Clearly, Markle is doing amazing work in supporting women and combatting gender inequality. Hats off to the Duchess of Sussex, and I can't wait to see how her advocacy inspires others.