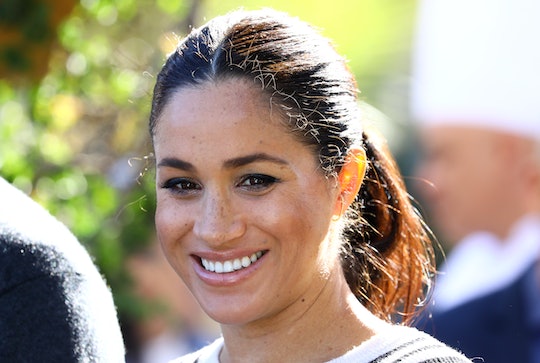 A hospital located 30 minutes away from the Duke and Duchess of Sussex's Frogmore Cottage residence is reportedly on standby for the royal baby's birth, as The Sun reported Sunday. If this exciting event happens within the next week or so, Meghan Markle's baby could share an important milestone with a couple of members of the royal family. The more the merrier, as the saying goes.

When Prince Harry and Markle announced their baby news, they failed to provide a specific due date. A "spring 2019" arrival didn't give supporters too much information to go on, but additional details about the Duchess of Sussex's pregnancy have since emerged, including reports that her first child is supposedly due on April 29. As The Sun reported, Frimley Park Hospital in Surrey — the nearest hospital to Frogmore Cottage — is supposedly on standby given that the little one's arrival is imminent.

“When she goes into labor, she wants to remain at home for as long as possible but she’s in a situation where if something did go wrong and she had to be whisked to hospital, she would be," a source told the publication.

Of course, it's important to note here that Markle has yet to confirm a due date — or the rumor that she could give birth at home. But if the Duchess of Sussex does give birth within the next week, her child could share a birthday with Princess Charlotte, who was born on May 2, 2015. How cute would that be, right?

Even if the Duke and Duchess of Sussex's baby isn't born on May 2, it's more than likely Princess Charlotte and the little one will share the sun sign of Taurus (April 20 – May 21). Translation: There's a good chance these two will have a lot in common. They will be both cousins and besties!

But if Baby Sussex arrives a tad earlier, like on April 29, then they could share a day near and dear to the Duke and Duchess of Cambridge — their wedding anniversary.

Eight years ago, the couple tied the knot at St George's Chapel at Windsor Castle. Kensington Palace paid homage to the milestone via Instagram, captioning sweet photos of the parents: "8 years ago today — thank you for your lovely messages on The Duke and Duchess of Cambridge’s wedding anniversary!" Aww.

Speaking of the Duke of Cambridge, Prince William denied having any knowledge of the baby's due date, however, joking to curious fans on Friday that he's unsure when his niece or nephew will arrive.

"I haven't got my phone on me," he quipped, according to POPSUGAR. "I have no idea! You guys will find out before I do at this rate!"

If baby Sussex does arrive on either of these important milestones, it's unlikely fans will receive word anytime soon due to the fact that Prince Harry and Markle want to enjoy this emotional day in private.

"Their Royal Highnesses have taken a personal decision to keep the plans around the arrival of their baby private," a statement on behalf of the couple read, according to BuzzFeed News. "The Duke and Duchess look forward to sharing the exciting news with everyone once they have had an opportunity to celebrate privately as a new family."

Fair enough. Prince Harry and Markle have every right to celebrate in private before taking the news public, especially since this is their first rodeo.

In respect to the couple's privacy, fans will just have to wait and see whether baby Sussex arrives on Princess Charlotte's birthday or her parents' wedding anniversary. Or somewhere in between those dates. Only time will tell.