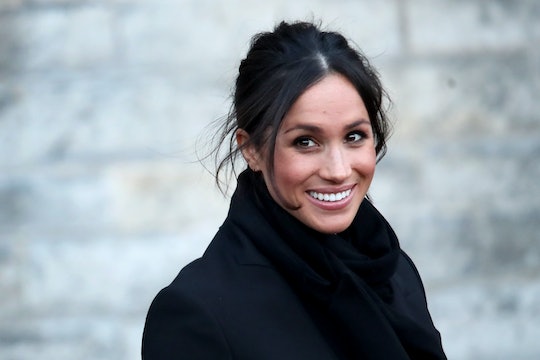 Prince Harry's future bride is not what the public has come to expect when they think of British royalty. She's American, she's divorced, she's biracial, she's an outspoken feminist, and before Prince Harry, she was best known for starring in Suits on the USA Network. But Meghan Markle's baby photos make it clear that although she wasn't bred to be auntie to the future king of England, she's totally got this royal thing under control. And no, I'm not talking about your typical American princess training; there's no evidence that she wore sparkly tiaras or held tea parties with her stuffed animals (yet). She's been training for the real deal since birth.

Markle was an English major in college, according to Marie Claire, so she's already mastered the language. And in her junior year, she worked at the U.S. Embassy in Buenos Aires, so she has a background in international diplomacy, which is, like, a third of a royal's job (the other two thirds being comprised of wearing hats and looking dour). And before Suits, she was a professional briefcase holder on Deal or No Deal, People reported, which means that she's experienced at looking pretty while staying silent. But there's so much more evidence, going back over three decades, that show she's the right woman for the job. To wit:

Markle has always been comfortable in front of a microphone or on TV, which will come in handy when she gives State of the Castle addresses, or whatever a duchess' role in the government is. I don't know; I'm American.

I'm not trying to be ageist here; I'm just saying that Markle's future grandmother-in-law, the Queen of England, is... no spring chicken. Will she be able to find common ground with her? Will she sit patiently and listen to her talk about what it was like during the war over and over? Totally!

She's Ready For The Royal Wave

I don't pretend to know all the ins and outs of royal etiquette, but I do know that there's a very particular way that the ladies wave, and it seems like it's hard to get the hang of. Luckily, it looks like Markle was born ready to greet.

Sitting On A Throne

Some women might balk at the idea of sitting on a chair made of gold or jewels or iron swords. But as a toddler, Markle demonstrated that she was comfortable sitting on anything, even human arms.

Royals often have to travel around and make nice with leaders from other countries. Here we see Markle, an American, showing Canada the kindness of advertising their great nation right on her body. How gracious!

Markle will no doubt have to attend functions with people she's not a big fan of, like certain presidents of certain countries where she used to live (and I don't mean Justin Trudeau). In literally every photo I came across picturing her with this little boy on the left, she looks displeased, but yet she sat with him again and again. She even let him have some of her popcorn. What a class act.

Here's another video of her with this little guy:

Sure, Markle may have worn a sheer dress for her engagement photos, but once she's required to show less skin, she's got this.

I dare you to find another girl her age who looked this classy in a pair of overalls.

If I'm a bird or a chipmunk looking for a fair maiden to perch on, Markle's my pick, hands down.

As we all learned from Prince William and Kate Middleton's wedding, all British ladies must wear a very fancy hat at all times. Every day is the Kentucky Derby for them. Look at young Markle, whose fashion sense was so keen (some days better than others... hey it was the '90s!) even before she was out of diapers that she was able to fashion a fascinator out of a paper plate!

She was born ready.