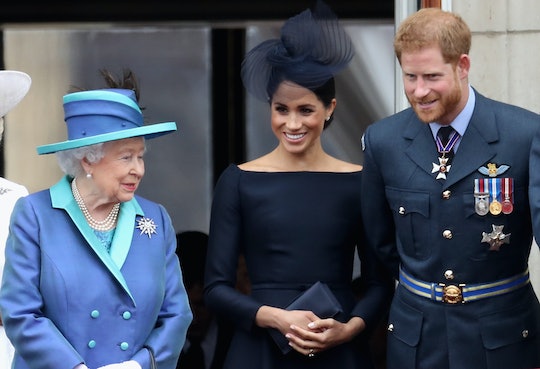 Meghan Markle's Royal Baby & The Queen Already Have Something In Common

Exciting news about the birth of the royal baby greeted the world on Monday, May 6, and fans of the royals everywhere are celebrating and waiting for more information. What will the baby — it’s a boy — be named? Will they hire a nanny? How will his birth change the line of succession? Well, as it turns out, Meghan Markle’s baby and the Queen have this royally sweet fact about their births in common and it could affect that last question.

Baby Sussex falls seventh in line to the throne, and as such he seems to have a very minimal chance of ever ascending it. But, as the Daily Mail reported, that was the case for Queen Elizabeth too, who was also the child of a second-born son. Edward VIII, who was the Queen’s uncle, was first in line to the throne when he abdicated. That meant his younger brother, George VI, was able to ascend, which opened the door to Elizabeth.

After Queen Elizabeth, the heir to the throne is Prince Charles, then his first-born son Prince William. Prince William's three children — George, Charlotte, and Louis — follow him in the order of succession, then comes Prince Harry. Baby Sussex falls next in line in seventh place.

The second son of Queen Elizabeth is Prince Andrew, and he gets bumped into eighth place in succession with the new birth. If Prince Harry and Markle have more children they will further push Prince Andrew down the line. Following Andrew are his daughters, Beatrice and Eugenie.

In terms of the monarchy, it's fairly recently that a new statute was passed that made the sex of the baby irrelevant in the line of succession. According to TIME, the Succession to the Crown Act, established in 2013, changed the centuries-old tradition of male babies usurping any females in the family in line to the throne. It meant that Princess Charlotte did not lose her place in line when Prince Louis was born.

The Act also repealed a law that required all descendants of George II to request approval from the reigning monarch before they married. The new law limits that requirement to the first six people in the line of succession, so the new baby will be free to marry as they choose.

There's another small tradition that has changed with the birth of Baby Sussex. Typically, according to CNN, the birth is announced to the public with a framed notice posted on an easel in the courtyard of Buckingham Palace. They still did that, this time, but it was already after a post had gone up on Instagram revealing both the birth and the sex of the baby.

But that modern update should come as no surprise since this baby is changing things all over the place. He is the first-ever British-American child born into the royal family; according to CNN, he'll automatically be a British citizen, and since he was born to a married couple, and one of them met American citizenship requirements, he can also be a U.S. citizen.

So while it's doubtful that Baby Sussex will ascend the throne it's not entirely unprecedented. That's a long way off though. For now, congratulations, celebrations, and sleep are in order for this new royal.