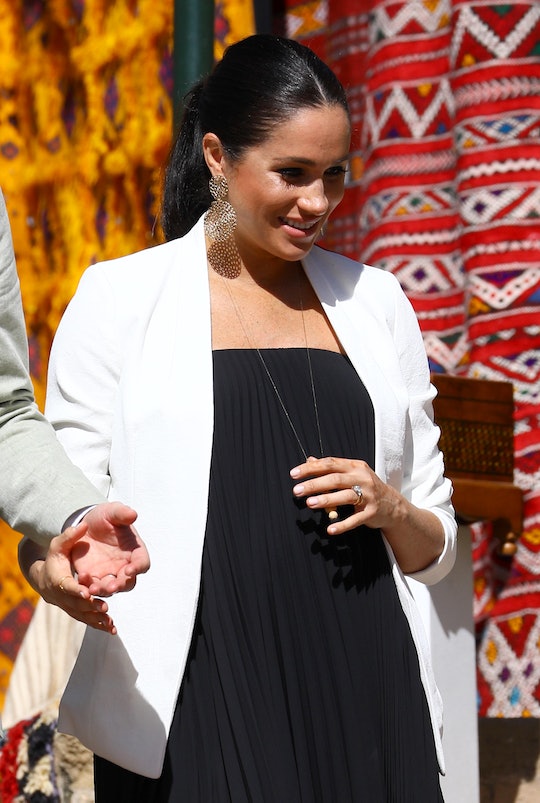 Since officially joining the royal family last May, Meghan Markle has been hailed as a style icon, and rightfully so. Throughout her pregnancy, she has continued to set the standard for maternity-wear looks. In fact, Meghan Markle's best maternity looks will inspire your own pregnancy wardrobe, so you can look like a princess — or a duchess, in this case — while you await the arrival of your little bundle of joy.

Markle has been very active throughout her pregnancy — traveling internationally several times and doing loads of royal appearances — only recently starting her maternity leave a couple weeks ago, according to Cosmopolitan. The royal mom-to-be was recently spotted at a private family engagement marking the christening of Zara Tindall's daughter Lena, and at the ceremony, according to Entertainment Tonight, Markle wore a burgundy Dior coat, along with a small beret. The 37-year-old Duchess of Sussex looked chic as ever as she was photographed alongside her husband.

The former Suits star's christening look is just one of the many fabulous maternity ensembles she's dressed her burgeoning bump in throughout the duration of her pregnancy, from dressed down looks to over-the-top evening gowns and everything in between.

As the world waits on pins and needles for Baby Sussex to be born, check out Markle's best maternity looks over the past few months.