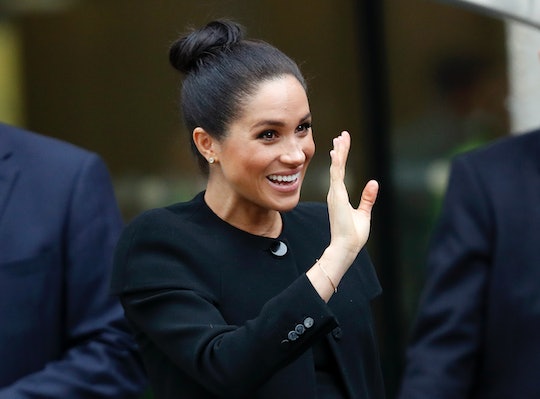 Meghan Markle's Birth Plan Will Reportedly Include This Holistic Technique

Even before Meghan Markle technically became a royal, she was always a health queen. Following in her (lifelong yoga teacher) mother's footsteps, she had a regular practice, plant-based diet, and other wellness regimes. It's clear that becoming the Duchess of Sussex hasn't changed her that much, given that Meghan Markle's birth plan will reportedly include the holistic technique of hypnobirthing.

To offer some context about just how revolutionary this is in the royal family, Glamour reported that it was Princess Diana and Kate Middleton who first severed royal birthing protocol by choosing to deliver in a hospital, rather than at home. (Gasp!) But it seems that Markle is returning to the family's roots in a way, reportedly preparing to deliver the new royal baby au natural, and with the help of a doula, according to Marie Claire.

In fact, a source told Vanity Fair that "Meg wants a natural birth if she can have one," and that this choice was reportedly inspired by her mother's holistic lifestyle, which has heavily influenced her own throughout the years. "Her mother is very into anything that is holistic and natural, and having been brought up with yoga and mindfulness, it’s all very much part of Meghan’s birth plan,” the source told Vanity Fair recently.

Part of that birth plan? According to Vanity Fair, acupuncture, training with a doula, and something called hypnobirthing.

Hypnobirthing is a process of mental preparation that allows for the mother to deliver in a peaceful and relaxed way, according to Hypnobirthing.com. The method is "built around an educational process that includes special breathing, relaxation, visualization, meditative practice, attention to nutrition and positive body toning," the site explains.

As the name would suggest, part of the process involves a type of hypnosis, which is supposed to help the mother enter an alternative mental state. According to Parents, the method is based on the power of suggestion, wherein the woman will use "positive affirmations, suggestions, and visualizations to relax her body, guide her thoughts, and control her breathing."

Those who are opting for a hypnobirth can choose to either do a self-hypnosis, or can work with a certified hypnotist or doula to assist in the process, Parents also noted, continuing to explain that it's common to use visualizations that the mother practices throughout pregnancy, such as the image of a flower opening as a representation of what's happening within them, and as a means of inducing relaxation.

Deena Blumenfeld, a childbirth educator who is an expert in various birthing methods explains to Romper that, despite its reputation for helping mothers deliver without fear, anything that "discourages evidence-based learning and information" is something to be approached with caution.

"If a woman who choose a hypnosis birthing method ends up needing an epidural, other pain medications or a C-section, she often feels like she failed because the method works for so many other people, according to the marketing of the method," she tells Romper. "I have encountered this a number of times in my career."

Blumenfeld added, "Remember, a method will work for some people, some times, but there is no universal method for how to give birth or to manage pain that will work for everyone. No woman is ever a failure if she needs [or] chooses pain medication or has a C-section."

Though it's not known exactly how many women opt for hypnobirthing during their deliveries, it's clear that alternative methods are on the rise.

Data from the National Center for Health Statistics notes that midwives are now present at over 13 percent of births in the United States, and in total, the number of women choosing to deliver at home or in alternative birthing centers has jumped drastically — by 70 percent — since 2003. Other research from the NCBI says that classes that include hypnobirthing focus more on natural instincts, mother/child bonding, "releasing fear" and relaxation, at rates nearing an almost 20/80 percent difference, at max.

Though every woman's birth plan is unique, and should always be based on their own wants and needs, it's great to hear that Markle reportedly feels free to introduce alternative methods into the royal family, and global consciousness.