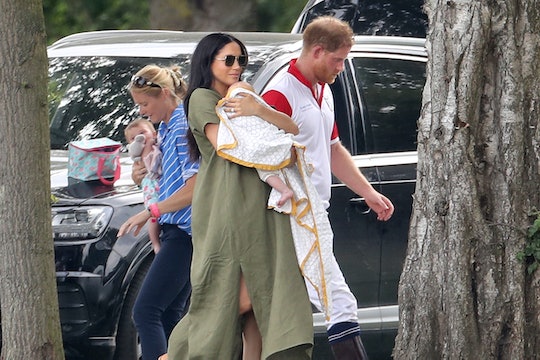 Happy birthday, Meghan Markle! That's right — the Duchess of Sussex is a whole year older. Officially, she will celebrate her 38th birthday on Sunday, Aug. 4. And although she hasn't directly divulged how she'll be marking the occasion, inside sources have revealed Meghan Markle's birthday plans are pretty low key now that she's a mom.

Considering it's royalty we're talking about, you'd think Markle might have been planning to celebrate her big day with a luxurious trip. (Maybe not on her actual birthday, but sometime near it.) However, apparently Markle had her heart set on something simple this year. And I have a feeling it has everything to do with the fact that she's a new mom who is still technically on maternity leave, by the way.

Reportedly, the Duchess of Sussex will spend her 38th birthday by "celebrating it at home," a source told Harper's Bazaar — and she plans on doing so "privately." Additionally, Markle has her heart set on a "family day" on her birthday, and not an extravagant party.

This seems to fall in line with what royal reporter Omid Scobie recently told Katie Couric. "Prince Harry will be back from Google Camp in Sicily, where he gave a speech about the fight against climate change, so they’ll be spending Meghan’s birthday quietly as a family," Scobie said, according to Elle.

The Sussexes have been so busy this year that I can imagine her birthday will simply involve a well-deserved day of rest with a few friends — and, of course, precious moments with Archie.

According to Express, it's also likely that Markle will mark the occasion in another way: With the help of the Sussex Royal Instagram and Twitter accounts. Which makes sense, considering the Sussexes make it a point to acknowledge big holidays, anniversaries, and other milestones in this manner.

Markle can also expect a couple of meaningful gifts from Prince Harry and baby Archie. “This year there will be a birthday gift from Archie and the odds are on a sepia or black and white photograph of her precious son in a solid silver frame from Aspreys,” a royal insider told The Sun. “The precious present is likely to have an engraving chosen by Harry that will make it extra special.” The insider added:

And Harry has a weakness for designing jewelry for Meghan, so it is expected that the royal will design another stunning piece — likely to be earrings — as a Sussex surprise.

If were wondering, Markle's low-key birthday this year is a bit different than how she's celebrated in recent years. Last year, for example, she attended the wedding of Prince Harry's friend, Charlie van Straubenzee in Surrey, England. And in 2017, Harry took Meghan to Africa.

But if you think about it, it's not exactly surprising that Markle would opt to celebrate her birthday privately this year. Baby Archie will be just shy of 3 months old on her birthday, after all. As most parents can attest, traveling with young babies — or leaving him behind and traveling somewhere — can be pretty stressful.

Besides, I don't know about you, but the first birthdays I celebrated after each of my children were born were basically a non-events. Especially when my birthday was just one month after two of my babies, and was still very much in the "newborn brain fog" stage. Worrying about going anywhere to properly celebrate my birthday was literally the last thing on my mind. So I feel you, Meghan. Welcome to motherhood. (And happy birthday!)