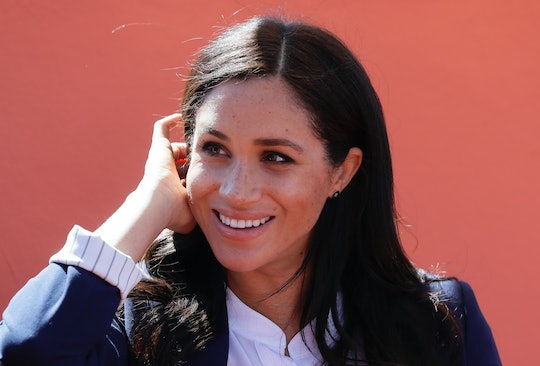 The Duke and Duchess of Sussex marked World Elephant Day by sharing a series of photos from their 2017 visit with Elephants Without Borders in Botswana on their official Instagram. And while the slideshow features more than one gorgeous photo of the magnificent mammals, it was a bracelet Meghan Markle wore while meeting elephants that really drew people's attention as it is said to be especially symbolic for mothers.

The Sussex Royal Instagram account shared a series of photographs from Markle and Prince Harry's Botswana trip, including one depicting Markle's hands gently touching an elephant's trunk. In the photo, Markle can be seen wearing a collection of thin, gold knuckle rings, a dainty Kismet by Milka Hamsa ring, and a silver bracelet. But the bracelet isn't just any silver bangle. Rather, it's what's called an elephant hair bracelet, according to Town & Country.

Although elephant hair bracelets are no longer made with the hair from an elephant's tail (due to illegal hunting and poaching it's now illegal to make any kind of jewelry from elephant hair, according to Africa-Facts.org), they are still said to hold a special meaning for those that wear them. Instead of hair, elephant bracelets are now made using everything from leather cord to softened reeds to metal wire.

Whatever they're made from, elephant bracelets are said to bring those who wear them luck, health, love, prosperity, and progress, as well as protection against harm and illness. Elephants are also believed to be a connecting factor between heaven and Earth in African culture, according to Africa-Facts.org.

The knots tied into an elephant hair bracelet are also said to hold special meaning, according to Hello! Magazine. "Two knots signify and represent the earth, which represents fertility, and ancestors and nature, which represent spirits and forces," Hello! Magazine wrote. Could Markle, then 36, have been thinking about fertility way back in the fall of 2017, a few months before she and Prince Harry announced their engagement?

Of course, this isn't the first time Markle is said to have worn jewelry that may hold special meaning. Since giving birth to baby Archie in May, Markle has been spotted wearing turquoise jewelry at least twice. Turquoise is said to be a master healer as it "promotes an energetic flow of the highest vibration of love, the spiritual super food to heal the world," according to the jewelry company Energy Muse. In fact, turquoise is said to be "a strengthening stone, good for exhaustion, depression, or panic attacks," according to CrystalVaults.com.

While it may have only been Markle's sense of style or taste in jewelry that drew her to both the elephant hair bracelet and the turquoise jewelry she wore after her son's birth, the special meaning behind them is an added bonus for mothers or soon-to-be moms.

You can snag a silver elephant hair bracelet for yourself (at a variety of price points) from a multitude of artisans on Etsy. But please, steer clear of bracelets made from real elephant hair.

More Like This
Elon Musk Shares New Photos Of Son, X, With His Own Twitter Badge
Meghan Markle Wore Lilibet On Her Chest As She Fed Chickens At Their California Home
Jodie Turner-Smith Opens Up About Being Secretly Married & Pregnant
Mariah Carey Says She Has Never Called Herself The “Queen Of Christmas”