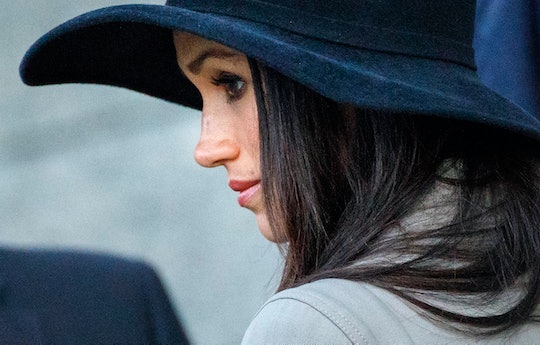 There's been a lot of talk lately about whether Meghan Markle‘s father would be attending her wedding. On Monday, TMZ reported that he would not be attending after he suffered a heart attack and reportedly staged photos of himself preparing for the royal wedding. But, now, Meghan's dad may be walking her down the aisle after all, also according to TMZ.

Thomas Markle reportedly changed his mind about attending the wedding after speaking to his daughter, TMZ reported. He's apparently decided to travel to Windsor to walk her down the aisle this Saturday and "be a part of history."

“I hate the idea of missing one of the greatest moments in history and walking my daughter down the aisle,” he told TMZ. “Of course I’d walk her down the aisle. This is a historic moment.”

Thomas said that Meghan tried calling him and sent him a text message to let him know that she loved him and was worried about him and how he was feeling, according to People. She also reportedly told him that she was not angry that he'd coordinated with a photographer to stage photoshoots ahead of the wedding — a decision Thomas now calls "stupid," People reported.

Thomas was all over the press after it was alleged that he'd worked with the paparazzi on a series of photographs to spin his reportedly estranged relationship with Meghan in a positive light, according to Express. He had allegedly arranged the photo shoot with a paparazzi agency to change his public image, Express reported. Thomas told TMZ that he meant no harm to Meghan or the royal family when he made the deal, and that he wasn't in it for money. Since Meghan started dating Prince Harry he said he's been offered anywhere between $50,000 and $100,000 for interviews — and he's turned all of them down, TMZ reported.

He just didn't want the world to only have seen photos of him "buying beer, looking disheveled and reclusive," TMZ reported. And Samantha Grant, Meghan's half-sister who reportedly isn't really in contact with Meghan anymore, said she had suggested their father pose for "positive" photographs "for the benefit of the royal family," according to Express.

On Monday, Thomas also told TMZ that he had decided not to attend the wedding in order to avoid embarrassing Meghan and the royal family. But after Meghan's comforting phone call, viewers may actually expect to see him there.

The 73-year-old is a former TV lighting director who's worked on the shows like Married with Children and General Hospital, according to Express. He's a Daytime Emmy Award winner for Outstanding Achievement in Lighting Direction for his work on General Hospital. Thomas divorced Meghan's mother, Doria Ragland, in 1987, after they'd been married for 10 years, Express reported. And, since then, his relationship with his daughter has been estranged.

But Thomas, who was reportedly in the hospital with chest pains, said he still aims to travel to Windsor Castle on Saturday, The Telegraph reported. Samantha reportedly told the Good Morning Britain program that her father was "quite depressed over the unbelievable series of events involving the media," according to CNN. She reiterated in the interview with Good Morning Britain that she was very concerned for her father's health, but said she did not want him to miss out on the big day and be deprived of walking his daughter down the aisle.

Kensington Palace issued a statement on Monday night, describing the situation as a "deeply personal moment for Ms. Markle in the days before the wedding," CNN reported.

Meghan and Prince Harry will tie the knot on Saturday, and whether or not her father will be there beside her is still to be determined.