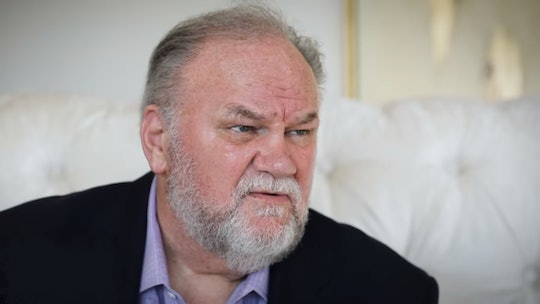 Meghan Markle's Dad Is At It Again, & It's Getting Super Awkward

If you were hoping that Thomas Markle finally learned his lesson about talking to the press, I have some bad news for you. Meghan Markle's dad is at it again... and it's getting super awkward. According to Markle, each of his appearances in the press have been intended to improve his public image and his relationship with his daughter and son-in-law, but this probably isn't the best way to accomplish either goal. Nevertheless, he persisted.

His media troubles began when it was revealed that he had staged paparazzi photos just days before his daughter's wedding to Prince Harry on May 19. He didn't attend the wedding, nor did anyone else on his side of the family, and last month he appeared on Good Morning Britain to set the record straight. "They would take pictures of me grabbing a beer, taking the garbage out, buying a toilet and making a big deal out of it," Markle explained. "I thought this would be a nice way of improving my look. But that was a mistake." He said that he'd apologized to his daughter and son-in-law, according to The Sun, and they'd both forgiven him, but he was unable to attend the wedding due to health concerns.

He also revealed that he had yet to meet Prince Harry, but that they'd spoken on the phone. He detailed their first conversation:

He said, "Hello Thomas," and I said, "Hello Harry." It became a conversation back and forth mostly about politics. He was asking me how I was feeling that day, and I was telling him how unhappy I was with the president, or with the idea of Trump, and that's how it began.

He also shared that Prince Harry had asked him for his blessing before proposing to Meghan, and he agreed after the prince passed a weirdly low bar: "Harry asked for her hand over the phone and I said, 'You're a gentleman, promise me you'll never raise your hand against my daughter and of course I will grant you my permission.'" Apparently the interview didn't go over well with the royal family, so he chose to rectify the situation by giving more interviews.

On Sunday, he sat down with The Sun and dropped some decidedly less diplomatic tidbits, like claiming that his daughter is "terrified" to be the Duchess of Sussex. "I see it in her eyes, I see it in her face, and I see it in her smile," he said. "This is a pained smile ... There's a high price to pay to be married to that family." He also claimed that he's being "shunned" because he profited off of his staged photos. "Anyone who makes a profit off the Royal Family becomes shunned. But I could have made well over $100,000 by just doing a talk show." But according to TMZ, he was paid £7,500 — or about $10,000 — for his Good Morning Britain appearance, and flown to California to stay in a luxury hotel. "Since the interview," he continued, "I've had no way of contacting her at all. The phone number that I call doesn't work anymore. The uh, I guess liaison with the Royal Family never answers back and there's no address I can write to." If he could speak to his daughter, he said, he'd tell her that he just wants to be a part of her life. And, "If I had a message for Harry, it's 'Get over it. I'm your new father-in-law.'"

Just days after giving his "last interview" to The Sun, he gave another to TMZ, in which he justified the previous one. "I was silent for a full year and the press beat me up every day saying I was a hermit hiding in Mexico, so I gave my story. Apparently that interview put the royal family in their silence mode ... so, I gave another interview to break the silence. All they have to do is speak to me." That sounds almost like a threat. But according to Markle, he's having fun toying with the royals. "Tomorrow is my birthday, 74 years old, and I'm enjoying the fact that I can make the entire royal family not speak." What a mess.