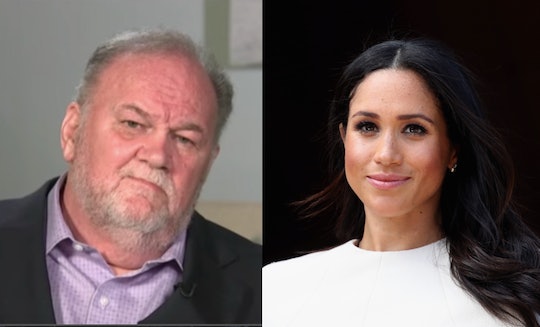 Rumors about Thomas Markle, father of Meghan Markle, Duchess of Sussex, were rampant during the weeks surrounding her wedding. And thanks to all the gossip, alleged comments, and staged paparazzi photos, so much information got muddled together, leaving Meghan's fans wondering what the real deal was regarding her father's absence at the royal affair. And now, one month after the wedding, Meghan Markle's dad has spoken out in a video interview — and he has some ideas about when Meghan and Prince Harry, Duke of Sussex, will start their family.

On Monday, Thomas Markle appeared in a video interview on Good Morning Britain, revealing plenty of interesting tidbits (and clearing up plenty of rumors) about himself as well as Meghan and Harry's relationship. When hosts Piers Morgan and Susanna Reid asked Thomas about when Meghan will have children, he told them that Meghan “has wanted children for a long time," reported People.

“When she met Harry she spoke about how much she loved him and so there has to be a child making somewhere soon,” he added, according to People. “I don’t think there is a stork in the air yet but I think it will happen sooner or later.” The royal family has not responded to Romper's request for comment regarding whether Thomas' speculation is true.

Thomas also revealed that he and Harry still have not met in person — a fact that was widely disputed preceding the wedding. "We have yet to see each other face to face," Thomas said in the interview. We've had interesting conversations on the phone. He's a smart guy."

In the interview, Thomas also explained how Harry asked him for his blessing to marry his daughter. Harry and Meghan called Thomas together, and Harry asked for Thomas' permission. Thomas recalled telling the prince:

You are a gentleman. Promise me you will never raise your hand against my daughter and of course I give you my permission.

Another phone call came after the paparazzi photo ordeal. As a refresher, Thomas posed in staged photos for the paparazzi shortly before the royal wedding, Harper's Bazaar reported at the time. In the photos, he was pictured getting measured for a suit, reading a book called Images of Britain, and working out. "I had been seen as negative for an entire year, I just wanted to improve my look," Thomas said of his media portrayal. He explained that he purely posed in the photos to help his image, not for money. He also added that he called Meghan and Harry to apologize, and they were both very forgiving.

The hosts also asked Thomas why he ultimately did not make it to the wedding. At the time, it was reportedly due to a heart attack he suffered days after the paparazzi scandal, TMZ reported. On Good Morning Britain, Thomas clarified everything, explaining:

The truth is I couldn't get over the fact that that [the paparazzi scandal] had happened — all that stuff was working on me, I had a bit of a heart condition, this pushed me a little further to the point where I had heart palpitations, I had to go and drive at two in the morning to Rosarito ... and I had a heart attack.

In hopes of still making the wedding, Thomas said he checked out of the hospital against the hospital's wishes. However, the day that Harry's friend was scheduled to come get Thomas, he began having heart palpitations again. Thomas said his friend then took him to a hospital across the border in California to get heart surgery. Before the surgery, he said he called Meghan to inform her he would not be able to come to the wedding. He told Good Morning Britain:

Meghan cried, I'm sure. She did cry. And they both said, "Take care of yourself, I'm really worried about you."

Meghan confirmed that Thomas would no longer be walking her down the aisle in a statement on Kensington Palace's Twitter just two days before the wedding, Mashable reported. Her statement read:

Sadly, my father will not be attending our wedding. I have always cared for my father and hope he can be given the space he needs to focus on his health. I would like to thank everyone who has offered generous messages of support. Please know how much Harry and I look forward to sharing out special day with you on Saturday.

It's clear that Thomas loves Meghan, and it's unfortunate that he was not able to walk his daughter down the aisle at her wedding. Here's hoping his predictions about Meghan starting a family were shared with her permission, and fans will have to wait to find out whether they are actually true.