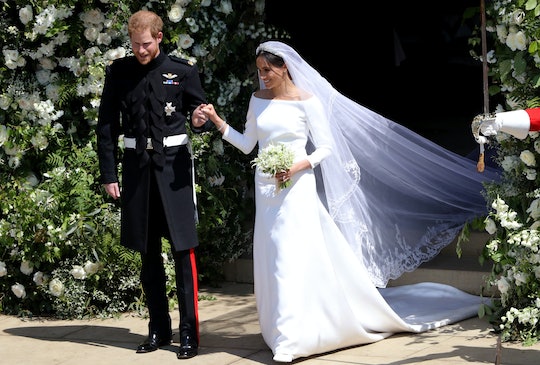 Meghan Markle, the former Suits star, is a total style icon, known for rocking some killer suits, so I was half expecting (OK, more like hoping) that she'd break the mold and wear a suit today. She didn't go that far, but her Givenchy dress did straight up slay. I mean, how gorgeous was that veil? Her gown was sleek and simple, a big departure from the big gown Princess Diana wore on her wedding day. While both gowns were truly stunning, it's fun to compare Meghan Markle's dress versus Princess Diana's dress.

Markle's understated, elegant gown was designed by Claire Waight Keller, the Artistic Director for the French fashion house, Givenchy. The gown featured an elegant boat-neck, three-quarter length sleeves, and a curve-hugging fit that accentuated Meghan's slender waistline. But the real showpiece was the tulle veil that measured over 16 feet, according to USA Today. Meghan looked exquisite as she ascended the steps of St. George's Chapel with the ethereal veil flowing behind her.

In contrast, Princess Diana's grandiose gown, created by husband-and-wife design team David and Elizabeth Emanuel, featured 10,000 pearls, a 25-foot-long train, and a veil that used 153 yards of tulle. The gown was a total showstopper, almost literally. Princess Diana nearly couldn't fit into the carriage scheduled to take her to St. Paul's Cathedral. The train of the dress had to be folded "like you would fold a bed sheet," explained Elizabeth Emanuel in an interview with The Daily Mail.