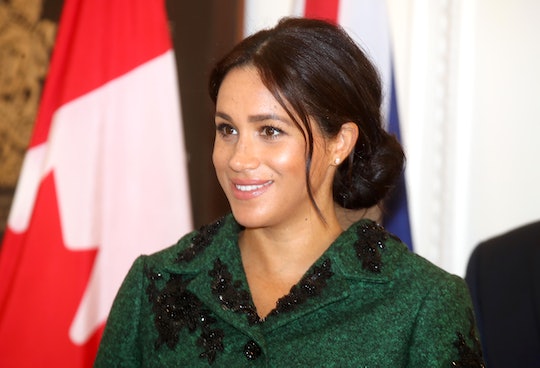 Turns Out Meghan Markle Is A Fan Of Reality TV, Just Like The Rest Of Us

Meghan Markle is a member of the United Kingdom's royal family, a total boss mom, and so much cooler than I'll ever be. Although I will never be a member of the royal family, it turns out that Markle and I have a lot in common — we have the same taste in terrible TV. Yes, Meghan Markle's favorite reality TV show is definitely one that people have seen before. This fact will make people fall in love with her even more than they are already.

After Markle deleted her blog, The Tig, and personal Instagram account, there are a lot of things that people don't know about her likes and dislikes. It's hard to remember the fun facts about Markle which she once shared with fans, like her favorite wines, vacation destinations, and books. Luckily, some of that content still exists, allowing people to get to know her on a very personal level that they can no longer reach with the Duchess of Sussex. In a newly unearthed interview on UKTV from 2016, Markle reveals some details that people will probably love knowing about her, according to Us Weekly — like her favorite TV show to watch when she has some much needed down time.

When the interviewer asked Markle what her favorite thing she enjoys without guilt was, she had one very fast answer to that question — The Real Housewives of Beverly Hills. Yes, Markle!!!

Out of all of the reality shows to watch on Bravo, Real Housewives of Beverly Hills is a pretty good one to be obsessed with. The housewives in Beverly Hills are unlike any of the other housewives on the show — they live very lavish and glamorous lives in their hometown of Beverly Hills, California, and are super unapologetic about it. Plus, the cast members are pretty famous in their own right — two of the housewives are successful actresses. This is something that Markle, a successful actress herself, probably enjoyed watching at the time.

It's so easy to get lost in the stories of each individual housewife and the drama that connects them all together. I mean, it's a huge reason why so many people keep watching the show and all of the cities they go to. You can't blame Markle for enjoying it just as much as everyone else does. But, it's a little unclear if Markle still watches Real Housewives of Beverly Hills now that she lives in the UK — after all, this interview was conducted in 2016, and a lot has changed in her life since then. Like, a lot has changed.

Since Markle participated in this interview, her life changed a lot. The couple reportedly met just five months after this interview was conducted, according to Town & Country, and then began dating shortly after. Once word got out that Markle and Prince Harry were officially a couple in October 2016, their relationship continued to escalate until they got engaged in November 2017. So, it's just as likely that her taste in reality TV could have changed, too. Or, she might not have the time to watch TV now that she is the mom to her three month old son, Archie.

But, having a newborn means plenty of late nights spent awake with nothing to do but feed the baby and try to get it to sleep. And when there is nothing to do, old reruns of the Real Housewives of Beverly Hills definitely come in handy to pass the time.