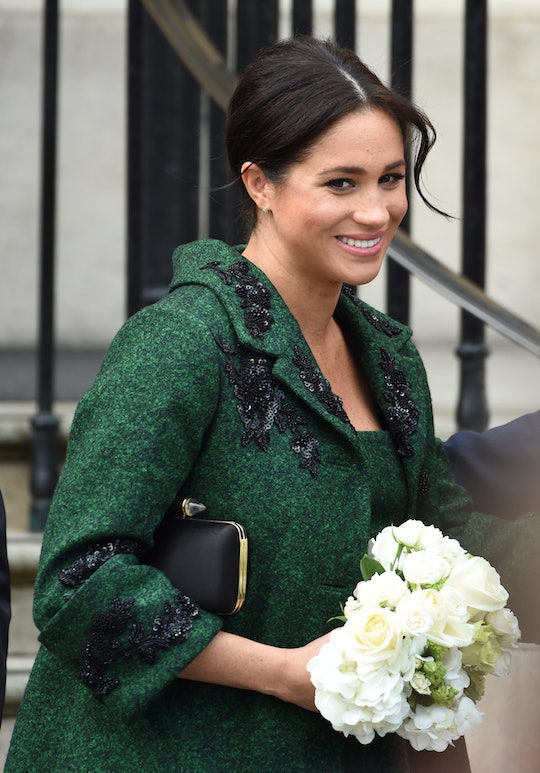 Coincidence? I think not. The Duchess of Sussex's outerwear at a recent celebration for Commonwealth Day has a detail that's just too perfect, and Meghan Markle's green Commonwealth Day coat seemed to include a sweet nod to mom Doria.

As People reported, the duchess wore a fabulous green coat to the royal family's Commonwealth Day celebrations, a day that celebrates the United Kingdom's affiliated countries.

Hello! magazine added that Markle, who is pregnant with her first child with Prince Harry, seemed happy to participate in festivities at Canada House for her first stop of the day, celebrating the alliance between Canada and Great Britain.

Markle's adopted hometown for the six years she filmed the show Suits was Toronto, the mag noted, and Markle seemed excited to meet people from her old stomping grounds at the event.

While she was doing so, though, fans noted her green, vintage-style coat, from Canadian-British designer Erdem, People detailed. The deep green, textured, 1950s style coat (or so Hello! thought) had black flowers embroidered on the collar and sleeves that the company described as "Doria beaded rose embroidery," per People.

Awww, what a cute shoutout to Meghan's mom, Doria Ragland, back here in the States, People theorized. Now, it could be that the name connection is entirely a coincidence... But I personally doubt it.

After all, fashion designer Erdem Moralioglu has had royal family fans before, so he may have made the accessory-name choice on purpose.

Romper reached out to Erdem about the detail, but did not hear back by the time of publication.

Markle told Vanity Fair in 2017, before her marriage, that she'd been wearing the brand "for years," and, as PopSugar confirmed, Princess Eugenie took her official engagement photo in an Erdem floral dress that was already in her closet (love these recycling royals).

Meanwhile, Kate Middleton also likes the label, having worn it last fall to the Victoria & Albert Museum in London, as per Harper's Bazaar.

First off, I love all of these outfits, and it's cool that the royals understand that in buying high fashion clothing, it's a great idea thing to wear the items more than once.

I also think it's adorable that Markle is most likely in a nesting phase in her own pregnancy, and thinking about her own mom these days. Or, you know, maybe it's simply the most perfect coincidence.

Ragland, meanwhile, who lives in Los Angeles and teaches yoga, according to the UK's Mirror newspaper, is surely coming back to England sometime soon to either help her daughter as her due date draws near, or assist after the baby's birth.

This seems even more certain following last year's stories in the British tabloids (before Markle had even announced her pregnancy) that Ragland was taking nanny classes to prep to help her daughter. Would this mean Ragland would move across the pond permanently?

No one knows for sure, but Vanity Fair did report that not only would Ragland likely return to help with the baby, but that there will be a bedroom for her at Harry and Meghan's place in Windsor.

I think it's nice to ponder not only Markle experiencing a happily-ever-after in the gorgeous English countryside, but her divorced mom getting a fabulous new phase of her life as well. With the royals, anything can happen.