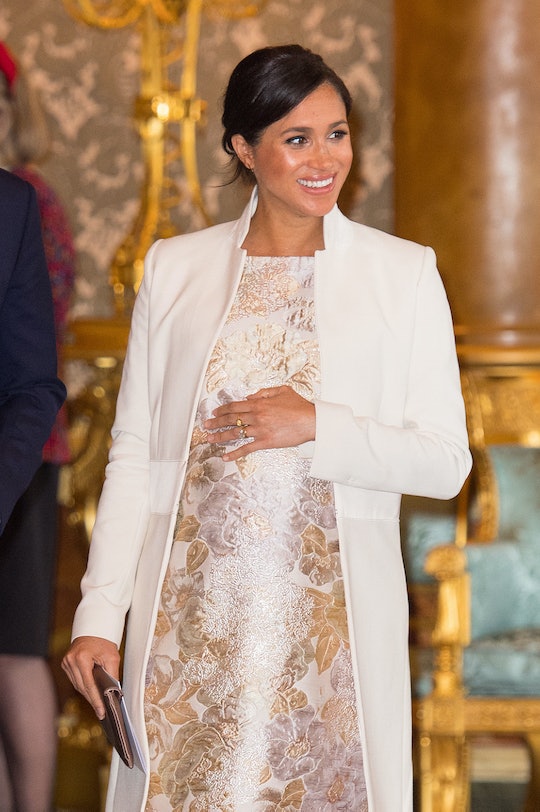 The Duchess of Sussex is months away from giving birth to her first baby with the Duke of Sussex. Considering many fans are anxiously awaiting this moment, it's fair to assume people want to hear Meghan Markle's latest pregnancy update. If you're a fan of the royals, there's a good chance this sweet bit of info will have you counting the days down until spring.

Although it might seem like Markle announced her baby news only days ago, she's about eight months pregnant, according to the Daily Mail. Despite being weeks away from her maternity leave (there's speculation it will start sometime in March based on when the Duchess of Cambridge began her own), Markle is still attending official events, like a special reception at Buckingham Palace on Tuesday.

The party was attended by people involved in charity organizations, some of whom the Duchess of Sussex has met before. “I look different than when you saw me last!” Markle reportedly told one guest, according to People.

In another conversation, Markle gave an update about her due date when a attendee reportedly asked her if she ever gets tired of the well-wishes. “No, it’s actually very sweet,” the Duchess of Sussex reportedly told the guest, according to People. “It’s a very sweet, nurturing thing to ask. We’re nearly there!”

Aww, how exciting. It's a nice reminder that fans of the royals are incredibly close to meeting Markle and Prince Harry's little one.

Amid all of the excitement, a few rumors have surfaced regarding how the Duchess and Duke of Sussex intend to raise their baby. As for the latest piece of speculation? On Feb. 28, a source claimed to Vanity Fair that Markle doesn't intend to raise her child within the confines of gender.

"Meghan has been talking to some of her friends about the birth and how she and Harry plan to raise their baby. Her exact word was fluid," the source said. "She said they plan to raise their child with a fluid approach to gender and they won’t be imposing any stereotypes."

But before you applaud Markle on her progressive approach, first take into consideration Kensington Palace's denial of the rumor. "This story is totally false," a spokesperson told Hello! magazine.

Another bit of gossip centers around the sex of Markle and Prince Harry's baby. Per a report from Us Weekly, Markle supposedly told pals at her baby shower in New York City last month that she's having a boy. The Duchess and Duke of Sussex have yet to confirm or deny the report, so take it with a grain of salt.

Although these rumors probably aren't the last of their kind, there's a good chance Markle doesn't pay them any mind. The Duchess of Sussex is too busy soaking up every moment of her pregnancy to entertain any drama, according to insiders.

“As an American, she was very excited to have a baby shower thrown for her," a source said of Markle's upbeat attitude during her baby shower in NYC, according to Vanity Fair. "I think she’d have felt she was missing out if she didn’t have one. It’s been such a fun time for her, she is with her oldest friends in the city she loves and really enjoying herself.”

Hopefully, Markle's last month or so of pregnancy will be as enjoyable as the rest of her baby journey has been because she deserves to feel happy and loved during this exciting time.