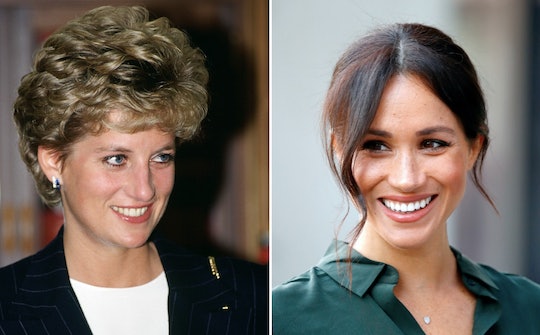 Even though she's stepped away from her royal duties, the Duchess of Sussex still has eagle-eyed royal fans on their toes. Just recently, in fact, it looks like Meghan Markle could be wearing Princess Diana's watch in a new black and white portrait with her husband Prince Harry

In the new portrait, which was taken for TIME by photographer Matt Sayles ahead of the couple's hosting gig on Oct. 20 for the magazine's TIME 100 Talk, the Duke and Duchess of Sussex are both dressed in suits as Markle rests her arm on Prince Harry's lap. And if you look closely, you'll notice that Markle is wearing a nice watch on her wrist. In fact, according to Harper's Bazaar, she appears to be wearing a Cartier Tank Française watch similar to the one that Princess Diana used to wear.

The Cartier Tank watch was first introduced in 1917 and modeled after an actual military tank, according to Esquire. The watch and its iterations has gained many famous fans over the years including Jacqueline Kennedy Onassis, Andy Warhol, and of course Princess Diana.

Prince Harry's late mother was often seen wearing the Tank Française watch after it debuted in 1996, as Forbes explains. The watch was reportedly a gift from her father, according to Tatler, and Prince William has kept it as a keepsake following her death.

It's hard to tell if the watch Markle is wearing in the portrait is the one that once belonged to Princess Diana. It's very possible the watch comes from Markle's own personal collection as the former actress told Hello! Magazine in 2015 that she purchased a Cartier Tank Français watch for herself when Suits got picked up for a third season. "I totally splurged and bought the two-tone version," she told the magazine. "I had it engraved on the back, 'To M.M. From M.M.' and I plan to give it to my daughter one day. That's what makes pieces special, the connection you have to them," Markle told the magazine.

While the whereabouts of Princess Diana's beautiful gold watch aren't completely clear, Markle has been given a few pieces of her late mother-in-law's jewelry, including her custom engagement ring, which features diamonds from Princess Diana's personal collection.

Perhaps Markle will provide a little extra insight into the famous watch when the TIME 100 Talk special airs on Tuesday at 1 p.m. EST.