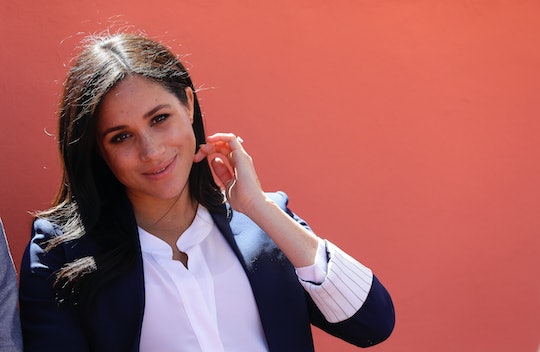 Meghan Markle's pregnancy has been nothing short of exciting. Although she's on maternity leave and is expected to give birth any day now, her maternity style is finally getting the attention and respect it deserves. In fact, Meghan Markle's maternity style got a major compliment from Anna Wintour, the editor in chief of Vogue.

In a new video, posted to Vogue's YouTube channel, the queen (of fashion) herself, Wintour, raved about Markle's maternity style and provided a bit of advice to anyone looking to dress stylishly with a bump. "I've been very taken by the way that Meghan Markle, the Duchess of Sussex, has been dressing throughout her pregnancy," Wintour said. "Her heels seem to be getting taller every time I look at a picture of her."

Finally Markle is getting the credit she deserves for her style and for the fact that she was able to rock a pair of six-inch high heels throughout her pregnancy. Although some people had recently been concerned for Markle's feet, according to ABC News, wearing high heels in pregnancy is medically safe.

Just another reason why she deserves a "best dressed" title for her fashion throughout this pregnancy.

In the video, Wintour explained why she was so taken with Markle's maternity wear — and how other pregnant women can learn from her sense of style.

"When pregnant, I think it's very important to continue wearing your own personal style," she said. "I never understand why women suddenly decide they want to hide their pregnancy. Why not celebrate it? It's an incredibly joyful time in a woman's life and it's nothing to be hidden or ashamed of." She added, "Much better to flaunt it and go for it!"

Markle has definitely done just that. Throughout her pregnancy, Markle has embraced her own sense of style, wearing dresses by her favorite designers (like Carolina Herrera and Dior) and mall brands like H&M, according to PopSugar.

What's more, she's embraced her bump, too (figuratively and physically). Throughout her pregnancy, Markle has chosen to wear dresses that emphasize her growing bump instead of hiding it, according to Harper's Bazaar. And royal watchers know about her love of holding her bump during her official royal appearances.

She's grabbed on to maternity fashion just as much as she has grabbed her bump — it's clear from her outfits and body language that she has loved being pregnant.

Her style during her pregnancy has fallen in line with her personal style mantra — find a few key pieces you love and stick with them.

In 2016, she elaborated on this to Best Health. "When you invest in a great piece, you're going to pull it out of your closet again and again and put it with a different top or different sweater... It creates a different, more modern look but it's still the same timeless items."

And her style is influenced by so many things, including her California upbringing. "It still has a casual flare, but it's a bit more polished," Markle told Best Health. "Whereas I normally would have put on jeans and flip-flops, I'll now put on a beautiful flat with jeans or a gorgeous heel. I've learned to keep the balance of that California aesthetic in a more refined way."

From her heels to her dresses, Markle's style is always on point, and has been throughout her pregnancy. And once she gives birth, there is no doubt that she will continue slaying with her style.

More Like This
Meghan Markle Wore A Pair Of Pearl Earrings Queen Elizabeth Gifted Her Years Ago
Attention, Class! The 'Abbott Elementary' Cast Earned Only Gold Stars At 2022 Emmys
Meghan Markle Wore A Treasured Pair Of Earrings To Honor The Queen At Her Funeral
Zaya Wade Is Rocking New Long Hair & As Gabrielle Union Put It, She's A "Vision"