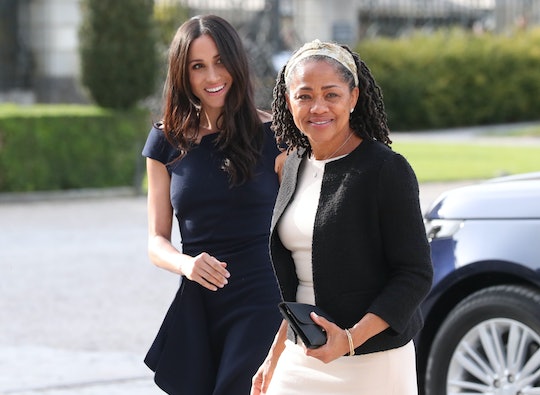 When Meghan Markle married Prince Harry this past May, a lot of sacrifices were made. Markle had to change careers and leave her home in the United States to move to her new husband's home country and live closely to his family, given that they're royalty and all. This was likely a lot for Markle to do, especially since she had to move away from her own support system at home — but not for long. That's because Meghan Markle's mom is reportedly making a major move to be closer to her daughter, which sounds like the sweetest thing ever.

Markle's mom, Doria Ragland, turned heads during her daughter's televised wedding in May. Ragland looked so beautiful as she sat in St. George's Chapel and got emotional, according to Harper's Bazaar, crying while watching her daughter on one of the biggest days of her life. But, both Ragland and Markle might be crying happy tears soon enough. According to Harper's Bazaar, Ragland is reportedly preparing to move to London to be closer to her daughter.

On Sunday, a friend of Ragland's reportedly told Express that she could be moving to England "as soon as next month" and will reportedly celebrate her birthday in England. "She is getting ready to move to London," someone who claimed to be a friend of Ragland's told Express. "I think she will be going as soon as possible. I know that she was eager to live closer to her daughter."

But if (and when) Ragland, who is a social worker, according to Town & Country, moves to England, she might not make this knowledge too public. Ragland has kept to herself throughout her daughter's engagement and wedding, choosing not to give interviews or talk about her daughter.

This is probably for the best — Markle "didn't have many family members" at her wedding in May, according to Town & Country, and Ragland has been a major support for her. So, Ragland's reported decision to move closer to her daughter will probably be so nice for both of them. This way, Ragland gets to be closer to her daughter while Markle will have strong, parental support system in her life. It's a total win-win situation.

Based on everything that Markle has said about her mom, it's easy to see that the two of them are close. Markle told Glamour last year that her mom is one of the people who changed her life for obvious reasons, explaining:

My mom's a yoga teacher, but she does social work, as well, and she works specifically with the geriatric community. For me to watch this level of life-long sensitivity to nurturing and caregiving, but at the same time, my mom has been a free spirit. She's got dreadlocks and a nose ring. She just ran the LA marathon. We can have so much fun together, and yet, I'll still find so much solace in her support.

And there is no doubt that she would continue to spend time with her mom and hang out with her if she were to move to England. "That duality coexists the same way it would in a best friend," Markle said of her mother, according to Glamour.

It doesn't seem like Markle or Prince Harry would mind seeing Ragland around a little bit more than usual. During their first televised interview as a couple after their engagement, Markle said that she and Prince Harry had spent a lot of time with her mom leading up to their engagement and have had so much fun with her, according to TIME. "Her mom's amazing," Prince Harry said during the interview.

And if Ragland does actually move to England, Markle wouldn't be the only person that she knows there. At Markle's wedding, Ragland and Prince Harry's father, Prince Charles, shared what viewers thought was a "special moment," according to TIME, suspecting that there is a friendship between the two. Not to mention, Prince Charles reportedly made Ragland feel like "a part of the family" during pre-wedding festivities, according to Hello! Magazine. This will definitely make family dinners at Kensington Palace a lot easier if Ragland were to ultimately move.

Any kind of change, especially one involving a move across the world and becoming the Duchess of Sussex at the same time, isn't easy. But Ragland's reported move will certainly be nice for Markle and would definitely provide her with a sense of comfort during this transitional time in her life.