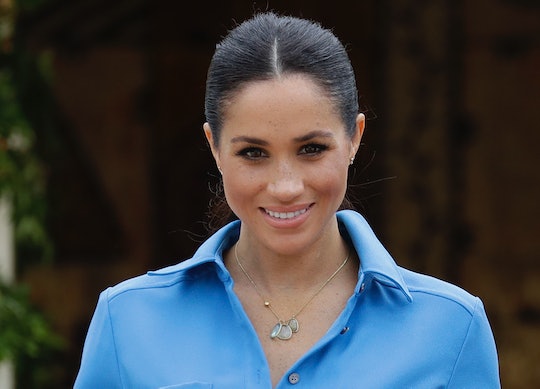 Amid the endless sea of reporting on every aspect of the Duchess of Sussex's life, one thing is clear: She's trying to carve out her own path in the world. From the private christening of baby Archie to breaking so-called royal protocol, she moves to the beat of her own drummer. As for her latest venture? Look no further than Meghan Markle's new fashion venture for charity, which aims to support women in the workplace.

Following on the heels of her editorial collaboration with British Vogue, Hello! reported the royal has launched a fashion collection in her own name, which will be stocked at British retailer Marks & Spencer. Of course, Markle — who has no background in fashion design — got a little help from her designer friend, Misha Nonoo, to create the collection, according to ABC News, while U.K. brand Jigsaw is also a partner.

But this isn't your average story about a famous person creating a fashion line, however — this venture focuses on charity. The proceeds will benefit British charity Smart Works, a nonprofit that "provides high quality interview clothes and interview training to unemployed women in need," according to the organization's website.

Personally, I love the idea, especially since the new collection is a buy-one-donate-one model. This means that, for every item purchased, one piece of clothing will be donated to a deserving person. It's a win-win all around.

While details about the venture are still a bit slim, the Duchess of Sussex did explain why she was drawn to the project in the first place.

“The reason why I was drawn to Smart Works is that it reframed the idea of charity as community," she said, according to People. "It’s a network of women supporting and empowering other women in their professional pursuits."

It's also important to note that this outreach isn't simply about giving someone a makeover, but about confidence. "This is not a fairytale," Markle said about the idea, according to TK. "If it's a cultural reference you're after, forget Cinderella —this is a story of Wonder Woman, ready to take on the world in her metaphorical and literal cape."

And the Duchess of Sussex can speak to this firsthand because she paid a personal visit to the company in January, helping a client take home enough clothing to get a head start on a professional wardrobe.

As for the clothes, there's peculation that the items will reflect Markle's own classic style, like streamlined dresses and tailored suits. Although the designs haven't been revealed yet, I think it's safe to say the pieces will fly off of the shelves.

Just ask Australian jeweler, Emma Swann, who has been struggling to keep up with orders ever since Markle wore her Verse brand gold "A" necklace while watching pal Serena Williams compete at Wimbledon, according to People.

But wait — that's not all. Who could ever forget the now-iconic white coat she wore for her official engagement photos with Prince Harry? The look provoked so much buyer interest, designer Line the Label's site actually crashed, according to E! News. Apparently, the coat was renamed "The Meghan" after the incident.

That all being said, I don't really understand why people criticize the Duchess of Sussex so much, especially given her charitable efforts. It would be nice if the naysayers either took a breath, or maybe just bought an item from the upcoming line because empowering women in the workforce is a very important cause.