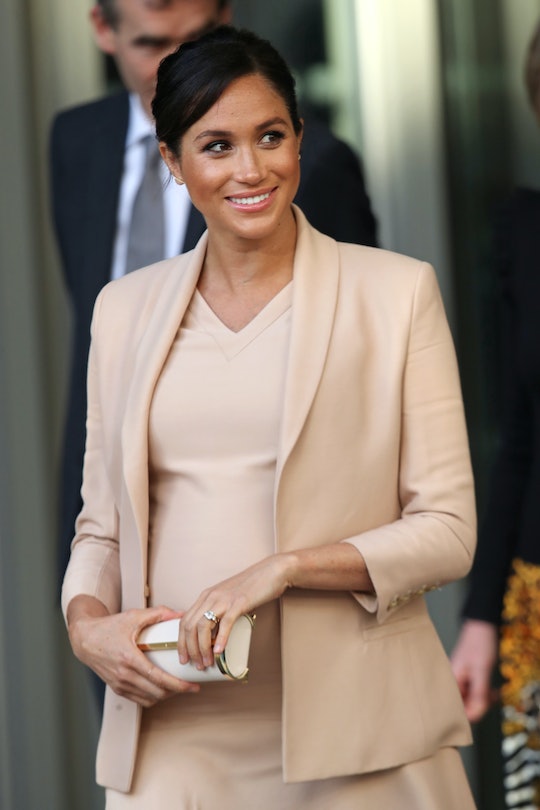 When it comes to members of the public interacting with the royal family, there's a certain type of behavior that's expected. Although most of us will probably never be in the position of meeting a royal in person, it's common knowledge that there are certain things you just don't do in such a situation. Abstaining from profanity in the presence of a member of the royal family should probably be a no-brainer. However, one UK kid apparently didn't get the memo. And Meghan Markle's reaction to a boy saying the F-word in front of her is hilariously priceless.

Granted, royal protocol isn't actually law or anything. However, following a few rules of respect and common decency is probably a good way to not embarrass yourself — or run the risk of being escorted away by security. So be sure to never touch a royal, unless it's for a handshake they initiate, according to PopSugar. Don't ask for a picture or a selfie, either. And don't just walk up to a royal will-nilly without being introduced by an aide. Be sure formal titles. Don't turn your back to the queen. It should probably go without saying that abstaining from swearing around such important public figures is expected, as well.

Unfortunately, it appears one teenager recently got a little too comfortable while chatting with Prince Harry and Meghan Markle. On Friday, Feb. 1, the royal couple was visiting with teenagers as part of their trip to Bristol Old Vic’s outreach program, Us Weekly reported. That's when it happened. “When you’re on the stage, you can’t be like, you know, f*cking around on the stage,” the teen said to the Duke and Duchess of Sussex, according to a video posted on an Instagram fan blog.

Don't worry, though. Meghan and Harry were totally cool with their reactions. Immediately following the profanity slip, Markle can be seen making a shocked face and a nervous laugh. Prince Harry, meanwhile, smiled and pretended to lose his balance. Basically, the Duke and Duchess took the encounter in stride — with the help of their signature charm and humor.

Although it's unlikely fans will ever hear a four-letter word slip out of her mouth now that she's a Duchess, it's not like Markle hasn't ever dropped an F-bomb of her own. According to The Telegraph, swearing was a habit Markle always strived to to break; she just never quite got there.

On her now-deleted personal blog, The Tig, back in 2016 — before she started dating Prince Harry — Markle touched on the very topic. "Stop biting my nails. Stop swearing. Re-learn French. These make my New Year's resolution list nearly (AKA actually every) single year," she wrote, according to The Telegraph. "The swearing comes in lulls triggered by being overworked or feeling mighty cheeky after a couple drinks. And when it comes to the biting of the nails - well, it still happens with a turbulent flight or a stressful day. It's unladylike. But then again, so is the swearing. Dammit." Markle continued:

My nails will be fine, and if I toss out a four letter word once in a blue moon, well frankly I think it adds character.

LOL. Behind her royal exterior is a woman after my own heart.

Although this teen's casual profanity was clearly not appropriate for the situation, it's difficult to argue that Meghan Markle and Prince Harry's reactions weren't entertaining. Here's to hoping Markle still lets some F-bombs of her own fly when she's behind closed doors with friends and family — even if she does have to pretend to be shocked that such a word exists while carrying out her royal duties.