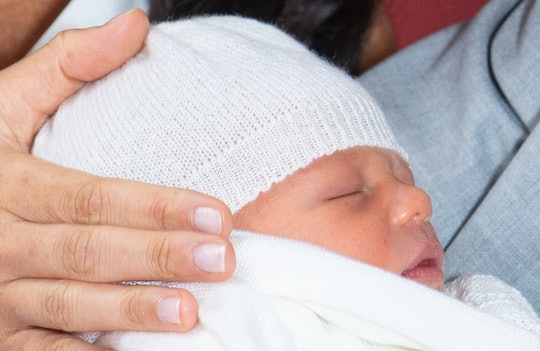 Baby Archie Has A Flower Named After Him, So Pardon Me While I Update My Garden

In a sweet turn of events, Meghan Markle's son, Archie, officially has a flower named after him, a gorgeous plant that made its debut earlier this month at the RHS Malvern Spring Festival, as Country Living reported. Not only is the namesake flower beautiful, but the meaning behind it fits the newborn's personality perfectly.

Just weeks after baby Archie Harrison's arrival on May 6, his namesake flower, a yellow chrysanthemum, was previewed at the RHS Malvern Spring Festival, an event that ran from May 9 to May 12.

The plant, launched by Chrysanthemums Direct, was "chosen for its vibrant lemon-yellow color and was selected before the birth, making it gender-neutral," according to Country Living. How lovely.

“We have been keeping our cultivar closely under wraps since the Duchess of Sussex announced her pregnancy last October," Martyn Flint, Manager of Chrysanthemums Direct, said about the special flower, according to People.

What's especially cool about this tradition? Every royal baby is given a namesake chrysanthemum, "the type of flower that decorated Westminster Abbey during Queen Elizabeth and Prince Philip's 1947 wedding," according to Cafe Mom.

Diving a bit deeper into the chrysanthemum's background, it has roots in eastern medicine. "The roots were boiled for pain relief, the petals were eaten and the leaves were brewed to create a ceremonial drink," flower retailer ProFlower's website states. "Legend has it the flower possessed the power of life."

Given that Archie is literally new life, I'd say this possible meaning fits.

The flower is also celebrated in Japan, where the chrysanthemum is "so highly revered" that a "single flowered chrysanthemum is the Emperor’s symbol," according to the University of Illinois Extension.

Additionally, "the flower is often incorporated into the crests of noble families."

Yep, the nobility part seems to fit Archie too.

As for the choice of yellow, common associations with this color include cheerfulness, joy, and energy, to name a few examples, according to Color Psychology. It's a bit too early to assess Archie's personality yet, so I guess the jury is out on that one for the time being.

Of course, Archie isn't the only royal with his own flower. Markle has a "deep pink-purple clematis" flower named after her, according to Vogue Australia, while Princess Charlotte's chrysanthemum flower is pink with green tips, according to Hello! magazine.

Circling back to Archie's new namesake, this isn't the the only garden-themed present of sorts he has received. Back on Tuesday, May 14, Prince Harry was gifted an egg-shaped stone with Archie's name engraved on it. The elegant stone will be hidden in a garden at Frogmore Cottage, with the intention of Archie discovering it on his own one day.

“Can you imagine him finding it and saying: ‘I’ve got a rock and it’s got my name on?’" Prince Harry told the person who gave him the cute gift, according to People. “Thank you very much. I love that.”

From the beautiful garden stone to the gorgeous yellow chrysanthemum in Archie's honor, it sounds like the new royal baby's young life is already inspired by nature and growth. Talk about the perfect start, right?