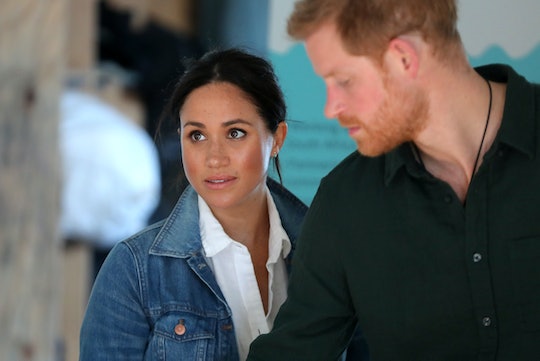 Earlier this month, in a rare but not altogether unheard of move for a member of the royal family, Prince Harry announced his wife was pursuing legal action against the Mail on Sunday after the tabloid had published one of her private letters. But while some feel the royals' action is hypocritical, Meghan Markle's tabloid lawsuit has prompted celebrities and politicians to speak out in her defense, including 2016 Democratic presidential nominee Hillary Clinton.

In an interview with The Sunday Times, former U.S. Secretary of State Hillary Clinton defended Markle's decision to take legal action against a British tabloid, saying "the way she's been treated is inexplicable."

"If the explanation is that she's biracial, then shame on everybody," Clinton went on to say, adding that she felt it was "certainly part of it."

In that same interview, Clinton's daughter Chelsea also spoke out in defense of Markle, noting that although she didn't know the Duchess of Sussex personally, she respected her. "I'm so grateful that she persists, and is unbowed, and is doing work she feels called to do. And isn't willing to be bullied," she said.

"Anyone who has the temerity to break the mold of what has previously been established and expected often, unfortunately, receives criticism and bile that I don't understand," Chelsea told the paper. "We've seen this pattern repeatedly."

In a lengthy statement issued Oct. 1 on the Duke and Duchess of Sussex's official website, Prince Harry claimed his wife had "become one of the latest victims of a British tabloid press that wages campaigns against individuals with no thought to the consequences." He went on to denounce what he called the "relentless" and "knowingly false and malicious" tabloid coverage of Markle.

"My deepest fear is history repeating itself," Prince Harry said in his statement. "I've seen what happens when someone I love is commoditized to the point that they are no longer treated or seen as a real person. I lost my mother and now I watch my wife falling victim to the same powerful forces."

But in the wake of the Sussex's announcement, some have criticized Prince Harry and Markle's decision to take legal action. For example, Piers Morgan sarcastically called on the British press to stop covering the pair and "give them the privacy they purport to crave, and spare them the ‘torment’ of having their myriad causes get huge beneficial publicity." Across the pond, however, many have spoken out in defense of the royals.

In a recent interview at the 2019 Armenia Technology Convention in Yerevan, CNN reported Kim Kardashian defended Markle, saying that "no one's going to be perfect."

"I think that everyone makes their own choices and decisions," she said, according to CNN. "And I think that, like I said, no one's going to be perfect. I'm not, they're not. I don't know who is."

Earlier this month, actor Jameela Jamil celebrated news of the royal's lawsuit by tweeting, "FORK YEAH HARRY!" The Good Place actor has previously told The Sunday Times that she was "massively mortified by the way people in England nitpick everything Meghan does."

"If Meghan was a white woman, all the bold things she's doing would be celebrated," Jamil went on to tell the paper.

Daytime talk show host Ellen DeGeneres also spoke out publicly in support of the Duke and Duchess of Sussex earlier this month, tweeting, "I'm proud to call Meghan and Harry friends, and I'm even more proud of them for finally saying enough is enough."

DeGeneres later spoke about the press coverage Markle receives with Nacho Figueras, an Argentine polo player and longtime friend of Prince Harry, during an episode of The Ellen Show. "Nobody knows all the very hard things that go with that," Figueras said of Markle giving up her life as an actor to marry into the royal family. "These guys are taking the time to make the world a better place, and they're all fighting for us. And instead of us embracing them and loving them and cheering them up, we are attacking them. Which is a shame."

"We should be treating them like heroes," Figueras concluded.

Of course, this isn't the first time celebrities and other public figures have spoken out in defense of the royal couple. In August, when a number of British tabloids criticized Prince Harry and Markle for flying via a private jet, singer Pink joined Elton John in publicly denouncing media coverage of the pair. "I’m happy to see people coming to the defense of The Duke and Duchess of Sussex," Pink tweeted. "The way people treat her is the most public form of bullying I have seen in a while. It's out of control. Let's all be a bit kinder, huh? Let's show our children that it's cool to be kind."

Since news of Markle's lawsuit broke, The Mail on Sunday has denied claims of significantly editing a personal letter Markle reportedly sent to her father prior to publishing it. In a statement to the Associated Press, the paper said they "categorically deny that the duchess' letter was edited in any way that changed its meaning." The paper has also said that it would "vigorously" defend itself against Markle's lawsuit.

Although members of the British press may be divided on the merits of Markle's lawsuit against The Mail on Sunday, it seems the royal has a number of friends backing her up across the pond.

More Like This
Meghan Markle Faced “Disgusting & Very Real” Threats While Living In The UK
Quinta Brunson Credits Her Parents For Her Confidence, Now & As A Kid
Andy Cohen's 3-Year-Old Son Ben Has Officially Taken Over An Important Hanukkah Tradition
Eric & Donna's Daughter Will Ruffle Red & Kitty's Feathers In 'That '90s Show'