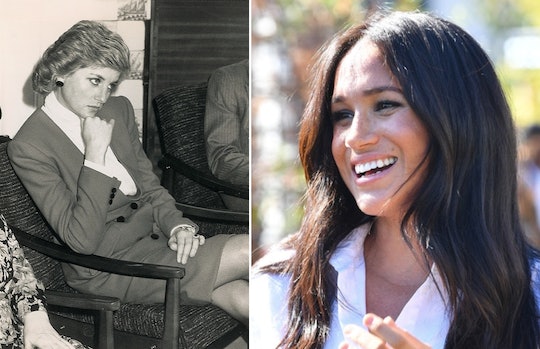 The Duchess of Sussex is a fashionista through and through. Whether she's guest editing Vogue, making headlines for her maternity wear or selling out items at J.Crew stores near and far after donning one of their styles (a phenomena coined the "Meghan Markle Effect"), she's now putting her keen eye to a good cause — and ensuring her work includes a number of personal touches as well. For example, at her new clothing line launch on Thursday, Meghan Markle made a touching tribute to Princess Diana, and it was the perfect way to pay homage to her late mother-in-law.

While modeling a few pieces from her new collection on Thursday, Markle accessorized with diamond butterfly earrings previously worn by Princess Diana during a trip in May 1986, about a year after Prince Harry was born, according to People. In addition, she wore a stack of gold bangles on her right arm which included a cuff bracelet with diamonds and blue stones that Princess Diana wore while visiting the Lord Gage Centre for Old People, a Guinness Trust Home, in East London in 1990, People explained.

It's not the first time Markle and Princess Harry have honored Princess Diana at a milestone event. When their son Archie was born earlier this year, for example, Princess Diana's siblings were among the first to learn of his delivery, according to Town & Country, which is a really sweet way to keep the Spencers involved. They've also done things such as quoting Princess Diana on Instagram, as Hello! Magazine reported. "Carry out a random act of kindness, with no expectation of reward, safe in the knowledge that one day someone might do the same for you," they captioned one post.

It should come as no surprise that Markle has a great interest in fashion. Earlier this year, in fact, she guest edited the September issue of British Vogue, once again focusing on social causes, featuring a number of women who are "trailblazing female changemakers – from activists to artists, prime ministers to climate change campaigners – who are breaking barriers and setting the agenda across the globe."

Now, her clothing line, which was created in collaboration with the charity Smart Works, is a capsule collection of affordable workwear, according to Page Six. On Instagram, Markle described it as a “five piece capsule collection that will equip the Smart Works clients with the classic wardrobe pieces to help them feel confident as they mobilise back into the work space," and explained that for every item sold, another would be donated to charity.

“Thank you to the four brands who came together in supporting Smart Works on this special project – placing purpose over profit and community over competition,” Markle continued on Instagram. “In convening several companies rather than one, we’ve demonstrated how we can work collectively to empower each other – another layer to this communal success story, that I am so proud to be a part of.”

Indeed, Princess Diana would probably be proud as well. Not only that her daughter-in-law is a fashion icon, but that she's putting her efforts toward positive social change, which was undoubtedly Princess Diana's own legacy in many ways. It seems that it runs in the family, after all.