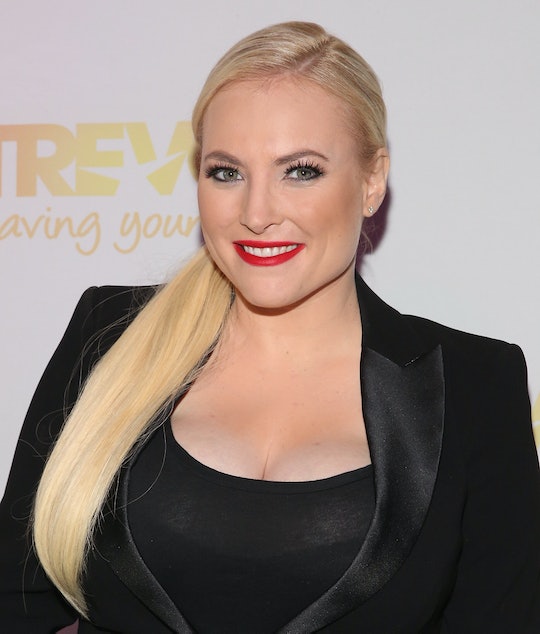 Meghan McCain is known for being fierce and outspoken as a co-host on the daytime talk show, The View. But when it came time to sharing her own experience with suffering a miscarriage earlier this week, she was a little more hesitant to speak up. And in a candid Instagram post, Meghan McCain revealed why she publicly discussed her miscarriage, in spite of her fears.

McCain opened up in op-ed published Friday in The New York Times Magazine, in which she revealed that she recently suffered a miscarriage after her and her husband, Ben Domenech, found out they were expecting their first child. "I knew I was pregnant before I formally knew I was pregnant," she wrote. "My body told me in all the ways women are familiar with. It told me in the same ways I was miscarrying."

If McCain had not written the op-ed, the public would not have been aware that she was pregnant or had ended up miscarrying. But McCain wrote in a subsequent Instagram post on Saturday that, although she was "petrified" to share her story, the outpouring of support afterwards made it worth it. "Ben and I are the luckiest, most incredibly blessed people in the world surrounded by love and support," she wrote.

McCain also explained her reasoning for sharing her story instead of keeping it a secret. "My hope is by continuing to share grief and loss, and addressing these taboo subjects head on it will help people who have experienced the same to feel less alone," she said. "None of us are alone in this. I was petrified to share my story publicly but I never, ever let fear dictate my life choices. I will always take the leap, I will always roll the dice."

Her story has so much power to it, and it's an experience that so many people out there have had. "To the end of my days I will remember this child — and whatever children come will not obscure that," she wrote in the op-ed. "I have love for my child. I have love for all the women who, like me, were briefly in the sisterhood of motherhood, hoping, praying, and nursing joy within us, until the day was over. You are not alone."

No matter how you might feel about McCain, I think a lot of people out there can appreciate her honesty. Even if she was only able to reach just one person with her words, they still have such a huge impact. People suffer from miscarriages all of the time, even if they don't open up about it — in fact, 10 to 15 percent of pregnancies end in miscarriages, according to March of Dimes.

But McCain hasn't been the only celebrity to express their fears for opening up about this issue. Actress Shay Mitchell, for example, revealed earlier this year that she had suffered a miscarriage in 2018, and just recently stated that she was scared to let her fans know about this, according to HuffPost. "It feels really tough because you feel broken, as a woman, and that is not a great feeling," Mitchell said in a YouTube video.

In spite of their fears, these people have the potential to reach so many others in the world who have experienced the same exact thing. Beyoncé, Pink, and Gwyneth Paltrow are just among the many celebrity women who have shared their own stories of miscarrying.

There is so much pain in losing a child, but McCain's story and inspiring message is a reminder that no one is experiencing their pain solo. No one should have to feel like the odd one out or isolated because of their experience — there are so many others, like McCain, who are going through the same exact thing.