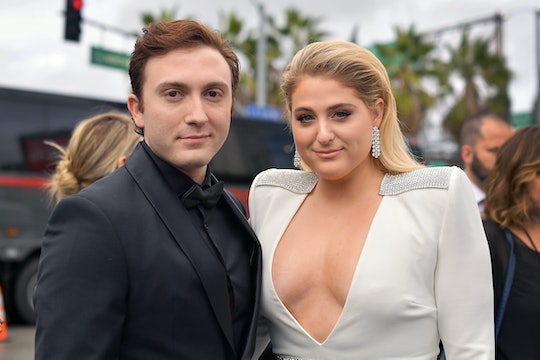 Sure, it may only be October, but when Meghan Trainor revealed she's pregnant with her first child, the "All About That Bass" singer delivered an early Christmas gift. On Wednesday, the 26-year-old pop star announced that she and husband Daryl Sabara are expecting a baby early next year with an adorably festive reveal that will surely make you feel jolly.

"You all know how long I've wanted this!!!!!," Trainor captioned a photo of her sonogram nested in a decorated Christmas tree on Instagram. "Daryl Sabara and I are so beyond happy and excited to meet this little cutie early next year! WE'RE PREGNANTTTTT!!!"

During a surprise appearance on TODAY, the couple could not contain their excitement as they announced their news. "It finally happened," Trainor said, sharing that her pregnancy did not come as a surprise to her family since she's long been open about wanting to have kids. "I was obnoxious about it, so it wasn't too big of a surprise, but they're so excited," she told TODAY.

Ever since Trainor and Sabara tied the knot in December 2018, she has been adamant about wanting to be "totally preggo." She even told People last year that she has "wanted babies forever." "I cry when I walk by diapers, it is a whole thing," she told the magazine at the time. "My therapist is like, 'Just wait!'"

Now, Trainor has a few more months of waiting before she gets to meet her little one.

Trainor told TODAY that she is over halfway through her pregnancy, which has fortunately been relatively easy for her so far. "I realized how amazing women are," she said during the interview on Wednesday.

It's only fitting that she announced her news with a holiday theme, since the singer is releasing her first Christmas album, A Very Trainor Christmas, on Oct. 30. She revealed to TODAY that the entire album was recorded while she was pregnant. "It's my favorite things in the world," she said. "A baby, my husband, and Christmas, and my family."

More Like This
Michelle Williams Is Going To Be A Mom Of 3!
Post Malone Reveals He’s Going To Be A Dad
Kelly Osbourne Reveals She's Pregnant With Her First Child & Can't Wait To Be A "Mumma"
Prince William Opened Up About Living With Grief In A Raw Speech