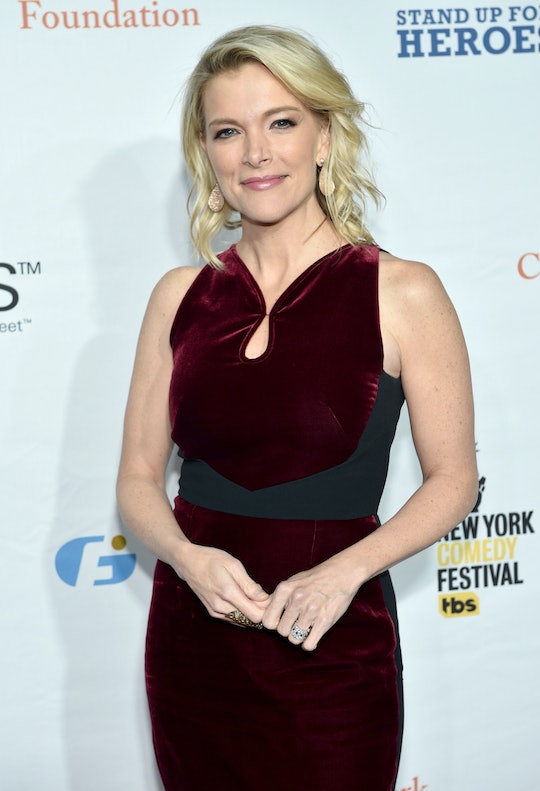 Megyn Kelly Says Some Women Want To Be Fat-Shamed, & WTF

It goes without saying that Megyn Kelly is no stranger to causing controversy. Back in June, Kelly received a lot of backlash when she invited Sandy Hook denier Alex Jones on her former show, Sunday Night with Megyn Kelly. A few months after the interview with Jones, Kelly enraged people when she asked Jane Fonda about her supposed plastic surgeries on Megyn Kelly Today. And just when you think things couldn't get any more offensive, Megyn Kelly is now claiming that some women want to be fat-shamed. Yep, Kelly is kicking off 2018 with another scandal.

In conversation with "fit mom" Maria Kang on Thursday, Kelly made a very uncomfortable and awkward comment about how she dealt with "gaining weight" during her law school days. Apparently, Kelly encouraged her stepfather to poke fun at her weight gain so she'd stave off the pounds. Kelly revealed, according to The Cut:

Some of us want to be shamed. When I was in law school, I was gaining weight, I said to my stepfather, ‘If you see me going into that kitchen one more time, you say, ‘Where you going, fat ass?’ And it works!

OK, so before I dive deeper into Kelly's unbelievable remark, it's important to first know who Kang is if you're not familiar with her already.

Kang, a mom of three and the founder of "No Excuse Mom movement," caused a bit of controversy in 2013 for sharing a Facebook photo that man felt fat-shamed moms, according to People. The post, which showed Kang posing in revealing workout gear next to her sons, boasted the caption: "What's your excuse?"

Naturally, many parents felt the picture's intent was to body shame and perpetuate the incorrect notion that you're unhealthy if you're fat or plus size.

To make matters even worse, Kang was unapologetic about offending her followers. Kang defended the viral picture, according to Facebook:

What you interpret is not MY fault. It's Yours. The first step in owning your life, your body and your destiny is to OWN the thoughts that come out of your own head. I didn't create them. You created them. So if you want to continue 'hating' this image, get used to hating many other things for the rest of your life. You can either blame, complain or obtain a new level of thought by challenging the negative words that come out of your own brain.

So, yeah. I can't say I'm surprised that Kelly made her controversial comments in the presence of someone who has been accused of fat-shaming herself. What a shocker.

And I also can't say that I'm blown away by Kang's response to Kelly's problematic anecdote. Kang chimed in, according to The Wrap:

My husband does that to me all the time. I tell him my goals and if it’s early in the morning and he sees me still in bed, he’s like ‘what are you doing in here.' Or if I’m doing something like eating something, like chips, he’ll take the bag and he’ll hide it. And I don’t feel ashamed of that because I told him what my goal was.

Of course, there's nothing wrong with receiving positive and healthy support from your loved ones while you strive to achieve a personal fitness goal. Everyone needs to hear words of encouragement now and then, right?

What is troubling, however, is Kang and Kelly's normalization of fat-shaming. If Kelly did feel uncomfortable with her body during college, I bet she could have lost the weight without her stepfather calling her a hurtful moniker like "fat a*s." And in Kang's case, I bet her husband could have found another way to champion her dietary goals without hiding her food, which seems a bit patronizing to me.

Plus, it's no secret that fat-shaming can lead to serious consequences like eating disorders and other forms of self-harm. The Centre For Advancing Health found that "high school students who believed themselves to be overweight were much more likely than their classmates to suffer from depression or commit suicide," according to Psychology Today, and about "65 percent of people with eating disorders say bullying contributed to their condition," according to National Eating Disorders.

So, for Kelly to be so glib about such a topic that can do so much damage is super offensive, to say the last.

Unsurprisingly, many people agree with my assessment:

Unfortunately, I don't think Kelly will take the time to listen to her critics. Kelly has a long history of pissing people off and I think she gets a kick out of offending viewers, no matter how sad that might seem. Of course, I hope that I'm wrong. I hope that Kelly will go on to educate her viewers on the dangers of fat-shaming, because it's never OK in any capacity, especially when it comes from someone you love.