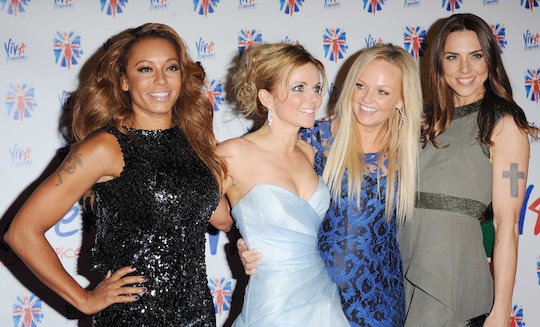 Mel B. Hints At Spice Girls Reunion, & Here's Why It Needs To Happen

This year marks the 20th anniversary of the Spice Girls getting together, and there may be good news in store for fans: Sporty Spice, aka Mel B., whose real name is Melanie Brown, says there might be another Spice Girls reunion at long last. It's not for sure, though. According to USA Today, the Spice Girl told a British television host that, given their anniversary year, it would be "rude not to celebrate so hopefully something will be happening pretty soon."

It goes without saying that a reunion would be something that fans really, really want, and this isn't the first time we've all been teased with the idea of a reunion tour. Just this past August, a number of ex-Spices taunted us all on social media, slyly suggesting at a reunion without offering any details. "Do I need to put my pigtails back in?" Emma Bunton, aka Baby Spice, asked on Twitter. Hopefully the answer proves to be yes. Their last reunion tour, back in 2007-2008, raked in $70 million, which, though a pretty penny, certainly doesn't match the success of the Spice Girls' debut album in 1996, Spice, which went multi-platinum in 27 countries.

Until we have confirmation of a reunion, the best we can do is daydream about the reasons it should definitely happen.