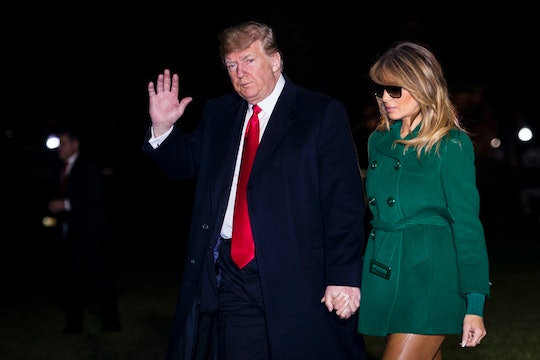 On Tuesday night, the first lady arrived 40 minutes earlier than her husband for his very address. But this wasn't because she didn't want to show up on her own or not be seen without her husband, it's because she was busy entertaining her guests for the SOTU, according to CNN. Stephanie Grisham, the first lady's deputy chief of staff for communications told CNN: "Mrs. Trump knows this is an important night, and wants to ensure the experience of her guests is special, and that they feel comfortable."

This makes sense. Melania and Trump invited 13 different guests to join them for this SOTU — this includes the family of a couple that was murdered in their home earlier this year, a police officer who survived a mass shooting, and a 6th grade student who has been bullied because of his last name, which is Trump. With so many guests to attend to, it makes sense that she'd be tasked with keeping them company.

But Melania must have not made this clear enough, because while not shocked, people on Twitter had some thoughts.

While some people have no problem showing up to events separate from their significant others (because sometimes, they just take forever to get ready), this isn't typical of presidents and their wives, according to CNN. In the years before the Trump administration, presidents would leave the White House with their wives and head to the Capitol building, together.

But the Trumps love to do things "their way" — so it's only right that they would start a new tradition for themselves. Last year (during their first SOTU), Melania and Trump also took two separate cars from one another, according to Vox, with Melania choosing to commute to the Capitol with the special guests of honor. The first lady, along with Vice President Mike Pence's wife, Karen Pence, hosted a smaller reception for these guests.

This seemed kind of strange at the time, according to Vox, especially since people hadn't seen the Trumps do this before. And, as previously stated, presidents before him hadn't shown up separately from their wives. President Barack Obama and his wife, Michelle, would arrive in the same car, according to Reuters, and did this every single time he had to give a SOTU speech.

At the end of the day, this isn't a huge deal. What matters is what Trump said and promised during the speech, not what happened on his way to this speech. But, people on Twitter do have a point. The president and the first lady's separate arrivals are just a little weird.