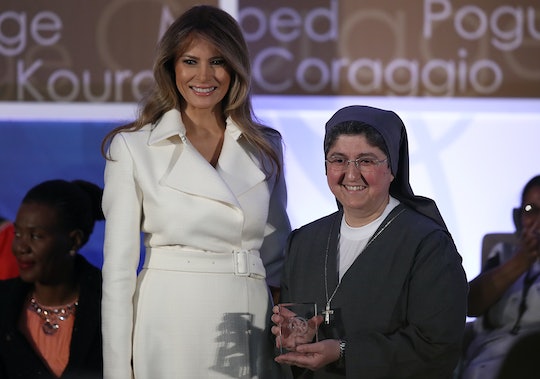 On Wednesday morning, first lady Melania Trump made a rare appearance at the State Department's Women of Courage event, where she gave a speech on women's empowerment and diversity. The first lady didn't mention the president during her speech, but many people on Twitter were quick to point out the disparity between Melania Trump's women's empowerment speech and her husband's previous words and actions. Unsurprisingly, the criticism was swift.

"The United States must send a clear message that we are watching," Melania said during her 10-minute speech, according to CNN. She then added:

We must continue to fight injustice in all its forms, in whatever scale or shape it takes in our lives. Together, we must declare that the era of allowing brutality against women and children is over.

Melania also honored 12 different women with awards, and asked the audience to "remain vigilant against injustice in all its many forms" in both the United States and abroad. Speaking of the honorees' many achievements, she said, "Ask yourself if you would have the fortitude of spirit, the courage of your convictions, and the enormous inner strength required to stand up and fight against such odds."

Many on social media couldn't resist comparing Melania's words with her husband's, and the irony quickly took over on Twitter:

The president is proud that his administration is full of so many female leaders. ... The president made women’s empowerment a priority throughout the campaign, speaking out on affordable child care and paid family leave, investing in women's health, and the barriers faced by female entrepreneurs and business owners.

Unfortunately for Spicer and Trump, that doesn't seem to be the narrative that many on social media remember. Instead, they have pointed out Trump's attempts to defund Planned Parenthood — a move which would overwhelmingly affect low-income women's health — and shined a light on some of Trump's past quotes about women, including gems such as the alleged "You have to treat 'em like sh—t" and "You can do anything ... Grab them by the p—ssy," a direct quote from an Access Hollywood video leaked during the election.

On Wednesday, however, Trump changed his tune and focused on women's places in the United States' economy. According to CBS, the president stopped by a women's empowerment panel at the White House and said, "Only by enlisting the full potential of women in our society will we be truly able to — you have not heard this expression before — make America great again."

Until their policies and actions line up with American women's needs, however, it seems like Melania and Donald Trump's words will continue to fall on deaf ears.