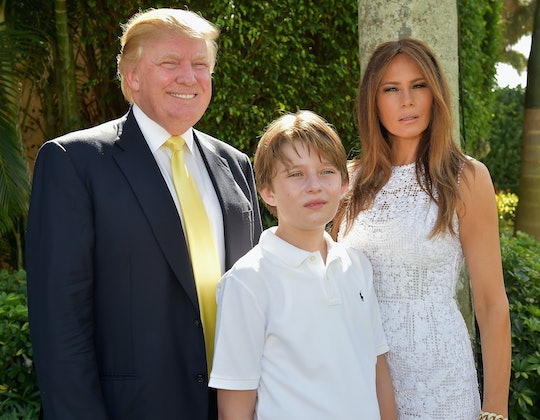 She may be living a lavish life, but her priorities are surprisingly down-to-earth. Melania Trump's quotes about her son Barron show that she's dedicated to being a good mom. And based on her evaluation, it seems as though she may be nurturing a Donald-in-training.

Presumptive Republican presidential nominee Donald Trump has five kids, according to Business Insider. Thirty-eight-year-old Donald Jr., 34-year-old Ivanka, and 32-year-old Eric are all children of Trump and his first wife, Ivana. Twenty-two-year-old Tiffany is his daughter with second wife Marla Maples. Ten-year-old Barron is Trump's only child with Melania.

Though over a decade separates him in age from his youngest sibling, Barron is already living like a mogul. One piece of evidence: The Huffington Post reported in 2013 that Melania ended bathtime by covering Barron in her Caviar Complex C6 moisturizer. Barron leads a luxurious lifestyle, but his mom lets interviewers know frequently that she's committed to providing her son with elements of a normal childhood. It can't be easy to keep a 10-year-old grounded when his dad's running for president, but Melania's comments suggest that she's doing what she can to bring out the best in Barron while guiding him through a stunningly surreal circumstance. Here are a few takeaways from Melania's quotes about Barron:

Melania told Parenting that she nicknamed Barron "little Donald." The similarities start with Barron's attire of choice, according to Melania's interview with ABC News:

He's not a sweatpants child. He doesn't mind putting on [a suit]-but not every day- and he likes to dress up in a tie sometimes like Daddy.

He also shares his dad's personality. Melania told Parenting that Barron may look like both of his parents, but he thinks like Trump:

He is a very strong-minded, very special, smart boy. He is independent and opinionated and knows exactly what he wants.

Melania went on to share that, from an early age, Barron wanted to be "a businessman and golfer." He's a fan of all kinds of toy building materials, from Legos to Magna Tiles, and he frequently prefers to play alone and focus on his work for hours. Melania told Parenting that Barron's creativity is quite impressive:

He's not old enough to manage a golf resort, but Barron got to make the decorating decisions for his own space (combining clean linens with plenty of cars). It's all good preparation for Barron to join the family business (after he graduates middle school, of course).

Barron Is Close To His Dad

Between Trump's business travels and campaign commitments, it can be hard for him to see his son. But Melania told People that when Trump and Barron do spend time together, the two of them really bond:

While speaking with Us Weekly, Melania said that Trump's campaign trips are hard on Barron but that the challenge is manageable:

He supports his dad 100 percent. Of course, we both miss him because he is on the road a lot, but [Barron] understands and he’s doing great.

She also told People that Barron really looks up to his dad:

He likes the way he talks, the way he is. They have beautiful respect and admiration for each other.

Melania also said in her Parenting interview that she embraces Trump's approach to fatherhood:

He is very busy. He spends quality time with Barron. They have a beautiful relationship full of respect and love.... [Trump] didn’t change diapers and I am completely fine with that. It is not important to me. It’s all about what works for you. It’s very important to know the person you’re with. And we know our roles. I didn’t want him to change the diapers or put Barron to bed. I love every minute of it.

Melania Is Committed To Motherhood

Because Trump is so often working, Melania spends the majority of time with Barron. She told People that she thinks it's critical to be "hands-on," and elaborated on that in her Parenting interview:

I am a full time mom; that is my first job. The most important job ever. I started my business when he started school. When he is in school I do my meetings, my sketches, and everything else. I cook him breakfast. Bring him to school. Pick him up. Prepare his lunch. I spend the afternoon with him. Sometimes I have obligations, but I also think children need to see a parent do what her passion is. It is a good example for a child. So the child can find passion as well and follow that passion in the future.

Melania told Parenting that she's a strong believer in the importance of allowing kids to make mistakes and form unique opinions:

I think the #1 parenting secret is that it is so important to have a good listening skills. I listen to what he says, what troubles him and what he is excited about. Then I can guide and support. I don’t push my thoughts or likes or dislikes. I want him to grow to be his own person.

She said to Parenting that it's important to "Be their friend and parent as well," later sharing that she even allowed Barron to draw on the walls in order to support his creativity. Now, she has a new challenge: teaching Barron to navigate the strong and sometimes insulting rhetoric directed at their family. Melania told Us Weekly that teaching Barron to handle life in the public eye is important:

We’re dealing with it and I’m teaching [Barron] the right way and giving him morals and tradition and teaching him values at home. I’m home most of the time with him and being a parent to him. He’s 10 years old and he needs somebody at home.

What's clear is that Melania appears to be deeply invested in Barron's future. And given Barron's interests and his parents' support, it looks as though he has a lot to look forward to in the years ahead.