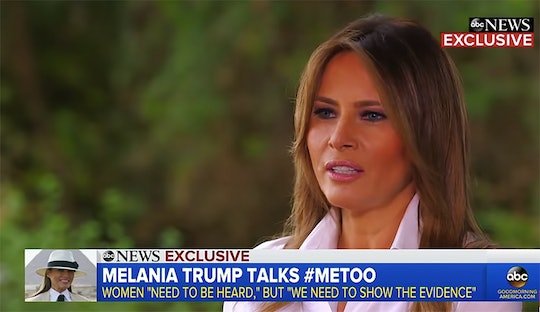 Less than a week after Brett Kavanaugh was confirmed to the Supreme Court, First Lady Melania Trump finally broke her silence about sexual assault survivors. Essentially, Melania argued that sexual assault survivors need "hard evidence" to back up their claims, and she also said that the public has an obligation to "protect" men too, as ABC News reported Wednesday. Unsurprisingly, many people on social media aren't impressed with Melania's take.

During the debate about whether Kavanaugh should sit on the Supreme Court, many Americans wondered where Melania stood on the issue. South Carolina Sen. Lindsey Graham, a Republican, claimed that Melania supposedly told President Donald Trump that she was "proud" of his demeanor during the hearings about the sexual assault allegations against Kavanaugh, according to the Daily Mail. Additionally, Graham claimed Melania referred to Kavanaugh as a "good man." He said during an interview with Fox & Friends on Sept. 28:

He was very complimentary, and he said Melania said that please tell me that she was very proud of the fact that I pushed back and stood up for this good man. And that meant a lot to me that the first lady felt that way.

Kavanaugh has denied Ford's claims, according to NBC News, and he argued that the allegations against him are nothing more than a "search and destroy effort" by "left."

Although Melania didn't confirm or comment on Graham's claims at the time, she did speak out about the #MeToo movement on Wednesday during an interview with ABC News.

"I support the women and they need to be heard," Melania said when asked by correspondent Tom Llamas about sexual assault survivors, according to E! News. We need to support them and you know, also men — not just women."

When Llamas questioned Melania about whether she thinks men have been treated "unfairly" lately, she said, according to The Hill: "We need to have a really hard evidence that if you're accused of something—show the evidence."

Llamas then told Melania that women might not be pleased with her answer, to which she replied, according to Fortune:

I do stand with women. But we need to show the evidence. You cannot just say to somebody I was sexually assaulted or you did that to me or...because sometimes the media goes too far and the way they portray some stories — it's not correct. It's not right.

Of course, it's important to note that false sexual assault allegations are few and far between. Although many people in the Trump administration, would like Americans to believe that women are falsely accusing men of sexual assault left and right, only "somewhere between 2 and 8 percent" of rape allegations are proven false, according to Vox.

Additionally, "research shows that rates of false reporting are frequently inflated, in part because of inconsistent definitions and protocols, or a weak understanding of sexual assault," a report from the National Sexual Violence Resource Center states.

As for sexual assault survivors handing over "hard evidence?" There's a lot to dissect there. First off, the burden of proof shouldn't be on a survivor. Women should be believed on their testimonies alone, something that fails to happen way too often. In fact, this is the very reason why many survivors don't report their assaults — "only 310 out of every 1,000 sexual assaults are reported to police," the Rape, Abuse & Incest National Network's (RAINN) website states.

Also, what constitutes as "hard evidence?" In most cases, presenting physical or corroborating evidence is impossible, especially when a lot of time has passed since the assault.

Following Melania's remarks, many people took to Twitter to bash her take.

"Wow. @FLOTUS says women need to show 'hard evidence' of sexual assault if they are to be believed," one person tweeted. "Unreal. Tho what can u expect if your husband is, well, a sexual predator who has committed sexual assault, gotten away w it and was even elected @POTUS?!"

"Melania Trump calling on sexual assault accusers to show 'hard evidence' to back up their claims," someone else wrote. "Should women start wearing body cams?"

Another person chimed in: "Guessing a man confessing on video tape to grabbing them by the "p*ssy" doesn't count as "hard evidence" to @FLOTUS #MeToo."

"I know this is REALLY hard for Melania to understand but a woman’s testimony IS evidence," a commenter wrote. "If credible and corroborated it’s winning."

"Hi Melania, I was raped at 19, and other than the size of his penis i have no evidence," one survivor said. "Please give me examples of what evidence i should have kept with me while being raped so i don't make the same mistake. #WhyIDidntReport #MeToo."

Melania did not immediately respond to Romper’s request for comment regarding the criticism surrounding her interview.

There's a good chance any sexual assault survivor or supporter of the #MeToo movement is probably offended by Melania's remarks, and with good reason. The credibility of sexual assault survivors shouldn't be questioned, especially during a time when women's rights at large are under attack. Hopefully, Melania will use the backlash about her comments as an opportunity to better inform herself about sexual assault.