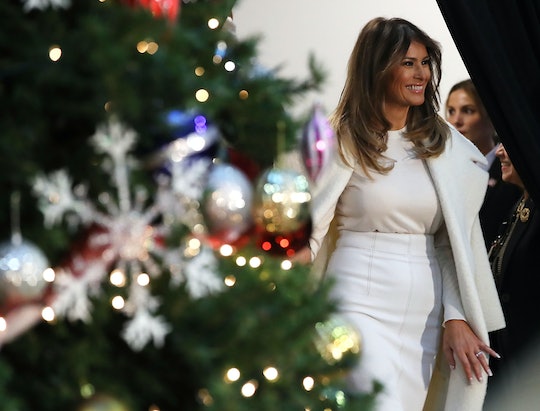 Being the first lady is certainly no easy feat. Along with being a wife and mother, the first lady also has a plethora of responsibilities to attend to, with the addition of the entire world looking on. So, when Melania Trump said she'd rather spend Christmas on a "deserted island," than in the White House, the internet practically said, "same, girl," and nodded its collective head.

At a special, Christmas-themed visit to the Children’s National Hospital in Washington, D.C. on Thursday, Trump answered a few questions from the audience of kids, and one of her answers has everyone talking. According to The Daily Beast, a 10-year-old boy named Andy asked the important question, "If you could spend the holidays anywhere in the world, where would you go?" And Trump's response wasn't exactly what anyone expected. "I would spend my holidays on a deserted island, a tropical island—with my family," she said, but it was the first part of her answer, before she paused to remember to include her family, that has Twitter in a riot.

The internet has long claimed that the first lady secretly wants out of her job, and possibly her marriage, although there has been no actual evidence of those rumors. However, because Melania is married to Donald Trump, people are actually concerned about what she's going through, and these latest comments are only adding fuel to the fire.

And soon after Trump made her "deserted island" comment, people on Twitter were quick to point out the intricacies of her remarks, and while, of course, much of what's been said has been fairly presumptuous, some of the tweets are still funny.

Obviously, President Donald Trump hasn't been a popular president thus far, and many of his policies and words and actions have been hailed as just taking American progress back fifty years.

So, when his wife armed the public with a perfect response, saying that she wants to disappear to a deserted island before remembering to include her family, it only makes sense that Twitter was ready to go. And suggesting that she take her husband with her wasn't the only response people had.

Because, honestly, Trump is a wife, mother, and has a full-time job of being the first lady. It can't be easy, and while she certainly has a lot of privilege in her position, she's also dealing with a lot.

As you may or may not remember, at the beginning of the year, not long after the Inauguration and the Women's March, the hashtag #FreeMelania began trending on Twitter. Tiny little moments of the first lady grimacing around her husband that were caught on camera were analyzed and poured over, and it became a social moment. Feminists all over became concerned that Trump was stuck in an unhappy marriage, and couldn't find her way out.

My dream is that Michelle Obama will convince her to leave him, and she’ll become this great feminist icon. She will walk into the middle of everything and say, 'He’s crazy. This is nuts. I don’t know what I was doing!'

So now, that Trump admitted she just wanted to get away, the internet is once again convinced that the first lady isn't as happy as she seems.

Of course, Trump was likely trying to make a little joke, as she laughed when she gave her answer at the event. But, her "deserted island" comment is still notable, and hopefully, if she really wants to leave, she can.