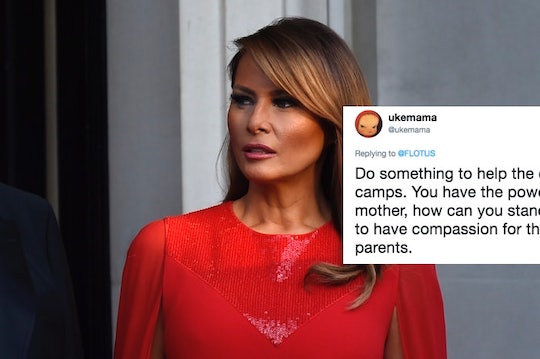 Melania Trump's initiatives as First Lady of the United States haven't necessarily received the best response. Her attempt to bring awareness to cyberbullying and other issues affecting children seem to mean well, but Melania Trump unveiling her "Better the Lives of Children Everywhere" plan amid the devastating border crisis that's resulted in scores of immigrant children in detainment centers is getting criticized — and rightfully so.

Melania's "Be Best" campaign is her personal project as First Lady. The campaign aims to focus on the real issues that children are facing, and encourages them to focus on their mental and physical health so they can be the best versions of themselves. And earlier this week, Melania announced her plans to expand this campaign through an ambassador outreach that would help further spread her positive message.

"As we move into the next phase of my initiative, I look forward to the work ahead," Melania said in a statement. "There is no greater opportunity than that of helping children reach their fullest potential as they grow up."

But some people on Twitter have pointed out the irony in this statement, especially amid the current border crisis that's resulted in children being in custody of Border Patrol without their parents while suffering in overcrowded conditions, according to Vox.

More than 2,000 immigrant children have been held in custody at detention centers without their parents, according to The Washington Post. Some children are being held for weeks at a time without adequate food or toothbrushes, as Vox reported. Some of these facilities even lack soap, clean bedding, and other things that are vital to life, according to Politico. There's also the grim fact that five children have died in the custody of immigration officials, according to USA Today, and the conditions only seem to be getting more dire.

Therefore, it's easy to see the irony in Melania's tweet and statement surrounding this new initiative. It's hard for all children to reach their fullest potential or better their lives when they're lacking the basic necessities to live. It's hard to tell the nation that you're ready to better the lives of all children everywhere, when children here in the United States are so clearly suffering.

Romper has reached out to Melania's office for comment, but did not immediately hear back.

Melania's Be Best campaign relies on three pillars: well-being, online safety, and opioid abuse. Through these pillars, the campaign aims to promote kindness, respect, and health, so children can be their very best. The campaign has not only been spread throughout the United States, but all around the world, according a statement from the White House, therefore it appears to be promoting wellness to everyone, no matter their nationality or citizenship status. But the White House's current actions regarding the handling of immigrant families doesn't seem to stand up to that.

Perhaps Melania should be redirecting her attention and this campaign to the border, where children's health and well-being are in jeopardy.