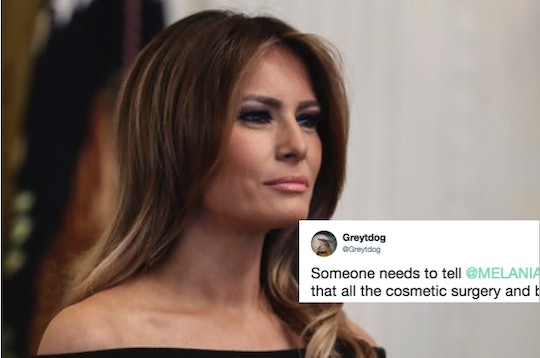 Throughout the course of the Trump administration, it's started to seem like every week has brought nothing short of back-to-back scandals and surprises for the American people, but this week was particularly poignant. As Michael Cohen was sentenced to three years in prison, according to USA Today, Melania Trump totally changed her hair color, and the internet's theories about why is... a lot.

After dealing with the ongoing allegations of her husband's disloyalty, in an interview on Dec. 13, Melania appeared with lighter blonde hair, which some are comparing to her stepdaughter, Ivanka's.

Where the theory gets weird, though? Some are suggesting that, considering the rumors that Trump allegedly cheated on women that "resemble Ivanka," Melania is sporting a new hair color to be... more like Ivanka.

In fact, the post that popularized the theory, written by user @Zeddary, states the following: "Nothing to see here just FLOTUS showing up with Ivanka's hair color on the show of Michael Cohen's only other client on the day Cohen was sentenced to prison for covering up how Trump cheated on her with women he said reminded him of Ivanka. Everyone's having a normal one."

It's pretty out there, but more than anything else, it's a really unfair if not inappropriate assumption, even for someone who is undoubtedly complicit.

Regardless of how you feel about the current administration or the president's personal affairs, the theory is pretty inappropriate considering that it presumes to know Melania's intentions, and casts on her a shadow of someone desperate to assimilate to the physical appearance of her husband's daughter.

Despite this, many users are responding to the post in agreement. "Wanted to look like Ivanka or Stormy," one reply read. "You can almost read 'HELP' between the highlights," said another.

Aside from this particular theory, social media in general has been aghast at her hair color change, which is in total pretty uncalled for, and highlights once again the almost ludicrous scrutiny women are subject to for their appearances when there are, objectively, far more important matters at hand.

However, Melania has already spoken out on the rumors, telling USA Today that she has "more important things" to worry about, and affirming that she does indeed love her husband.

When asked if she and her husband are doing alright, she said: "Yes, we are fine. Yes... I know people like to speculate and media like to speculate about our marriage and circulate the gossip," she said. "But I understand the gossip sells newspapers, magazines... and, unfortunately, we live in this kind of world today." She concluded: "It is not concern and focus of mine. I'm a mother and a first lady, and I have much more important things to think about and to do."

Earlier this week, Stormy Daniels was reportedly ordered to pay $293,000 to cover Trump's legal fees in the defamation case against him, The Washington Examiner reported. However, her attorney Michael Avenatti says she will "never pay the $300,000" because it is dwarfed by the $1 million owed to her, he claims, though Trump's reps have denied that is the case.

Regardless of where Melania stands with her husband, it would be appropriate for everyone to consider leaving her locks out of the conversation. There are far bigger issues to be focused on.