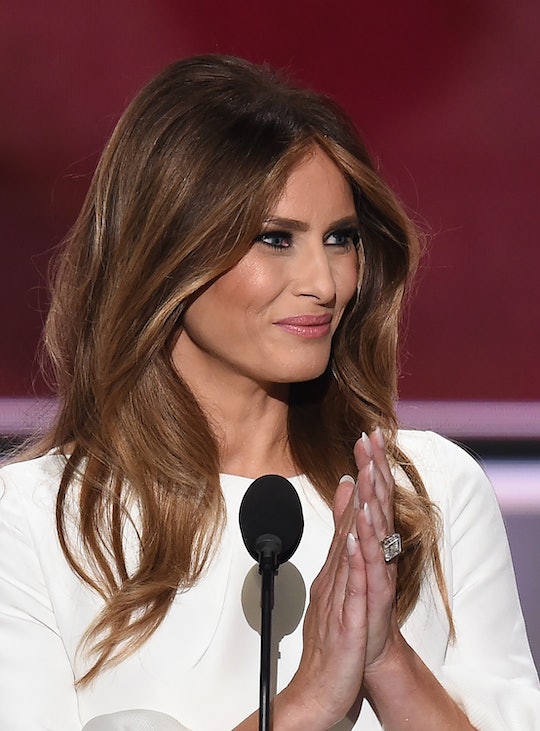 What should have been a slam-dunk opening night for the 2016 Republican National Convention instead became mired in controversy as allegations that the party’s potential First Lady, Melania Trump, plagiarized sections of her convention speech from one that Michelle Obama delivered before the Democrats back in 2008. Drawing on feel-good themes like hard work and respect, the businesswoman and former supermodel talked about the family values that undergird the Trump family. And certainly, many other families in and out of the political spotlight could claim the same ideals. But, placing Melania Trump’s side by side with Michelle Obama’s shows that not only were those values common in both families, but that Trump used many of the exact words to describe them as Obama did in 2008.

Exactly how many words are in question? According to USA Today, more than 100 words — just shy of two paragraphs — of Trump’s 15-minute speech have come under scrutiny. The similarities were spotted by Twitter user Jarrett Hill, who located many of Trump’s lines in Obama’s 2008 speech, describing the values that she and then-Senator Barack Obama had been raised with and hoped to instill in their daughters.

The Trump campaign has denied the plagiarism allegations, according to CNN, with campaign chairman Paul Manafort going so far as to call those who see similarities between the two addresses “crazy.” Well, crazy or not, the parallels between the two passages are striking. Here’s a side-by-side comparison of Trump’s and Obama’s words to their respective party members.

Obama: Barack and I were raised with so many of the same values: that you work hard for what you want in life.

Trump: From a young age, my parents impressed on me the values that you work hard for what you want in life.

Obama: ... that your word is your bond and you do what you say you're going to do.

Trump: ... that your word is your bond and you do what you say and keep your promise.

Trump: ... that you treat people with respect.

Obama: Barack and I set out to build lives guided by these values, and to pass them on to the next generation. Because we want our children — and all children in this nation — to know that the only limit to the height of your achievements is the reach of your dreams and your willingness to work for them.

Trump: They taught and showed me values and morals in their daily lives. That is a lesson that I continue to pass along to our son. And we need to pass those lessons on to the many generations to follow. Because we want our children in this nation to know that the only limit to your achievements is the strength of your dreams and your willingness to work for them.

In a press conference broadcast from the convention center in Cleveland on Tuesday morning, Manafort doubled down on his defense of Trump’s speech, saying that the address used “common words and phrases” that weren’t unique to either campaign. In an earlier CBS News interview, Manafort blamed presumptive Democratic nominee Hillary Clinton for the controversy, saying that the attacks on Trump were because Clinton felt "threatened" by the potential first lady. In that interview, Manafort seemed to confirm that Trump had written the speech herself with light support from speechwriters:

Sure, people looked at the speech, but frankly, this was her vision of what she wanted to communicate about her husband.

CNN reported information from two sources confirming that Manafort’s deputy Rick Gates was in charge of writing the speech and oversaw the vetting process. According to that same report, Gates denied responsibility for the speech.

More Like This
Parents Will Demand $675,000 From Son & Daughter-In-Law If They Don't Have A Kid Soon
This Free Website Connects Parents Who Need Formula With Those Who Have It
Social Media’s Effect On Kids’ Wellbeing Is A Public Health Emergency
Biden Signs Law Banning Unsafe Infant Sleep Products Attributed To Over 200 Deaths