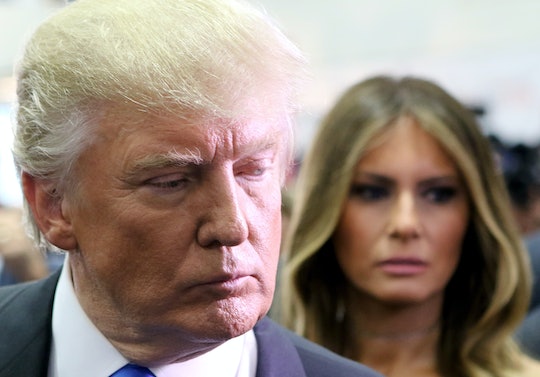 In the wake of the unearthed footage of Donald Trump using lewd language to describe how he would use his celebrity status to force himself upon women, a stampede of horrified reactions and calls for the Republican candidate to drop out of the race continue to make their way in. On Saturday afternoon, his wife — the person who might possibly be the most offended and hurt by the video from 2005 uncovered by The Washington Post on Friday — Melania Trump issued a statement about her husband’s comments and it’s frustratingly sad.

"The words my husband used are unacceptable and offensive to me," she said in a statement released on Saturday. "This does not represent the man I know. He has the heart and mind of a leader. I hope people will accept his apology, as I have, and focus on the important issues facing our nation and the world."

Meanwhile, a growing list of Republicans — some of whom who were reluctant to back the candidate initially — have since took to social media to condemn Trump's comments, including Speaker of the House Paul Ryan, former Republican presidential nominee Mitt Romney, and even Trump's running mate Mike Pence who said he was "offended by the words and actions described by Donald Trump."

The 70-year-old real estate developer and former reality television star apologized on Friday night only if anyone was offended by the comments where he talked about making moves on a married woman and "grabbing" women by their genitals because "when you're a star... you can do anything." The apology, however, dismissed the footage that's led to widespread outrage as "locker room banter" and as a "distraction" from more important issues.

"I've never said I'm a perfect person, nor pretended to be someone that I'm not. I've said and done things I regret, and the words released today on this more than a decade-old video are one of them," Trump said in the video statement. "Anyone who knows me, know these words don't reflect who I am."

But the explicitly vulgar remarks Trump made about women in 2005 aren't a distraction from more important issues. His remarks are a very important issue, which is exactly why so many are outraged. And while this latest revelation is just another example in a long line of misogyny, if the Republican candidate wins the presidency this trend would would undoubtedly continue, and that's a very concerning issue to discuss.

Melania Trump's statement shows that she is obviously upset and hurt, like so many other Americans, and her commitment to the Republican party is also very apparent. But, asking voters to also forgive her husband for his horrific comments is a frustratingly sad pill to swallow.