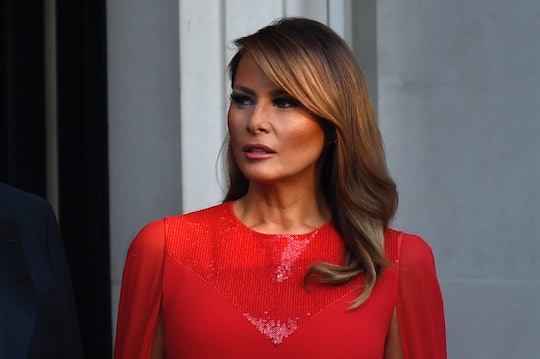 As many Americans watched former special counsel Robert Mueller's testimony on Wednesday, waiting to see what he said in regards to Russia's interference in the 2016 presidential election and Trump's alleged efforts to obstruct justice, it was clear FLOTUS had more pressing issues occupying her time. No, really — while Mueller was busy testifying, Melania Trump was tweeting about "Christmas planning" in July. Needless to say, her curious tweet sparked a variety of confused and offended responses.

As you might have already heard, Mueller testified in front of a pair of House committees on Capitol Hill, taking questions concerning the results of his investigation into Trump and his administration. Ultimately, Mueller indicated that his report did not, in fact, exonerate the POTUS, NBC News reported, despite Trump's conflicting claims when it was first released in April.

Trump's representatives did not immediately respond to Romper's request for comment regarding the obstruction allegations.

While all of this was going down in Washington, D.C., First Lady Melania Trump took to Twitter with a very random update. According to CNN, the FLOTUS shared a series of photos of herself choosing fabrics and flowers, and meeting with staff members about decorating the White House for Christmas. "#Christmas planning has begun in the East Wing at the @WhiteHouse," Melania wrote, literally while Mueller was testifying about her husband. "I'm looking forward to sharing our final vision for this unique tradition in the coming months." Oof.

Spoiler alert: The tweet was not well-received. Because as Newsweek reported, Twitter users had a lot of thoughts. One person commented, "What's the theme this year Malaria? Kids in cages?"

Yet another Twitter user declared, "This will be your last Christmas in the White House."

Another person commented, "Sweetheart, I don’t think you’re still going to be living in the White House in December. Are you not listening to the Mueller testimony? 'Yes, obstruction!'"

One Twitter user shared a photo of the White House decorations from Christmas 2018 — with white bonnets from The Handmaid's Tale edited on top of the red trees. They wrote, "Last year's will be tough to top, but I'm sure you can manage. Be best!" Ha!

While Melania's red Christmas trees did elicit plenty of comments in relation to Russia and The Handmaid's Tale, her 2017 design was completely destroyed online, according to TIME. And the memes were everything. Of the decorations, which resembled something straight out of a Tim Burton film, one Twitter user wrote, "Why do the White House Christmas decorations look like Voldemort is about to come back."

In a side-by-side of Ivanka Trump's holiday table setting and Melania's Christmas decorations, another Twitter user wrote, "Ivanka: MY holidays are the starkest and the most disturbingly barren. Melania: hold my bare existential dread."

Yet another person tweeted, "I photoshopped Jack Skellington into Melania's Christmas decor and honestly I like it now." (It does look rather fitting, doesn't it?)

In all seriousness, though, was Melania's random Christmas decorating tweet an attempt to distract from Mueller's testimony? Because I guess it sort of worked. However, in light of the ongoing border crisis, that Mueller's report did not exonerate her husband — and oh, I don't know, the fact that it's freaking July — it was more than slightly inappropriate timing, IMO.