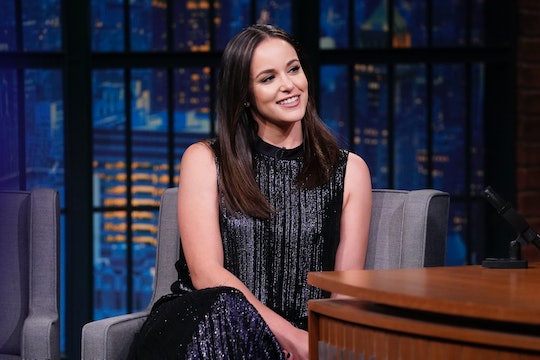 With the help of one mirror selfie, Brooklyn Nine-Nine star Melissa Fumero revealed she's pregnant with her second child in a candid post on social media. In fact, the actress took to Instagram on Sunday to let fans know she's "hella pregnant." She also went on to reveal that this pregnancy, however, has been harder than her first.

"Oh yeah, I'm hella pregnant," the 37-year-old wrote in an Instagram post that showed off her baby bump. "To be honest, I haven't felt like posting about it because this pregnancy has been way harder and... I don't feel that cute?"

Fumero welcomed her first child, 3-year-old Enzo, with husband David Fumero in March 2016, nearly 10 years after People reported the couple were married in 2007. Interestingly, the actor had also managed to keep that pregnancy a secret until roughly four months in. "Amazing time at our surprise baby shower yesterday," she wrote on an Instagram post dated Nov. 16, 2015. "Oh, PS- I'm pregnant."

A few months after Enzo's birth, Fumero revealed to People that she'd been busy filming for Brooklyn Nine-Nine up until almost the day Enzo was born. "[Enzo] was born, like, five days after we wrapped," she told the celebrity entertainment magazine, adding that her "ankles would get really swollen" due to the long hours on set and she sometimes had difficulty remembering lines or what she was supposed to be doing in a scene. "It's hard to think about anything other than being pregnant when you're that pregnant," she said.

But although Fumero has admitted that her second pregnancy has so far been harder than her first, she also noted Sunday that she's been making time for a little bit of self-care, which is helping her feel better. "Yesterday I got a really intense massage, an awesome chiropractic adjustment, and my hair feels thicker," she wrote on Instagram. "So I feel a little bit cute today."

On Sunday, Fumero's husband jokingly responded to her pregnancy announcement by commenting "Wait....WHAT?!" on her post.

News of Fumero's recent pregnancy follows reports that NBC has renewed Brooklyn Nine-Nine for an eighth season. But hopefully, Fumero won't have to film well into the ninth month of her pregnancy this time around.