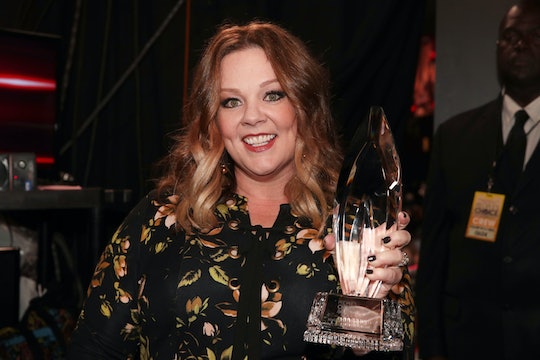 Melissa McCarthy Made An Appearance On 'SNL'

Since Donald Trump has been in office, he's made a point of making a Big Show out of his press conferences, so we should've have been surprised to see Melissa McCarthy take on Sean Spicer on SNL this weekend in a sketch that is truly guaranteed to make you laugh out loud. That's because a.) McCarthy is just downright hilarious, and b.) because it just felt very relatable to what's been happening as of late.

On Saturday Night Live this weekend, Melissa McCarthy assumed the role of press secretary Sean Spicer. So yes: she slicked her hair back and took fake questions from an SNL press corp. As you can imagine — she was totally on point and had no idea how to answer any questions, which made for some pure comedy gold. Because that's kind of how press secretary Sean Spicer has been living these days.

By the way: If you ever doubted that a woman could be straight up funny, McCarthy's Sean Spicer is ON POINT. McCarthy was the best woman to play a white male and get to the very heart of the matter. And know how to handle (or maybe not handle) the stress that comes with being press secretary. "Now I’d like to begin today by apologizing on behalf of you to me for how you have treated me these last two weeks, and that apology is not accepted," McCarthy stated during the skit. "Because I’m not here to be your buddy. I’m here to swallow gum and I’m here to take names."

The joke that McCarthy is making is also hard to swallow. "And also I don’t talk so good," McCarthy's Spicer says. It's oh-so-very-real if you've been watching any of the press conferences since the inauguration, and I'm sure the president will have a few choice tweets about SNL in regards to these skits. But McCarthy still managed to hit it out of the park nonetheless.